When the players on the Paso Robles varsity football team traveled down to Santa Maria on Friday, they had no intention on losing to the host Pioneer Valley team. Things got a bit nerve-wracking up until the final seconds of the game when the Bearcats scored the game-winning touchdown for a 31-28 win over the Panthers.

In the PAC 7 League bout, Pioneer Valley put the first numbers of the night up on the scoreboard before Paso High’s Bailey Gaither returned the ensuing kickoff to tie up the game, 7-7. Going into halftime, the two teams were tied, 14-14. 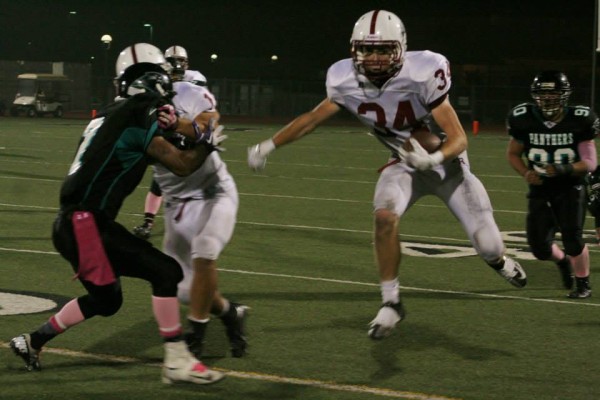 Paso High’s Bailey Gaither powers past the Pioneer Valley Panthers on his way to scoring for the Bearcats on Friday night.
Photo courtesy of Jennifer Railsback.

After adding another touchdown and a field goal in the third quarter, the Bearcats held a 24-14 lead over the Pioneer Valley. The Panthers turned up the heat in the fourth, scoring two touchdowns to take over the lead, 28-24, with just seconds left in the game. That was just enough time for Paso to score again and, after a failed field goal attempt by the Panthers, the Bearcats took home the 31-28 victory.

The Bearcats (6-2) will host the Arroyo Grande Eagles (6-2) on Friday at War Memorial Stadium. The junior varsity plays at 4 p.m. and the varsity takes the field at 7 p.m.