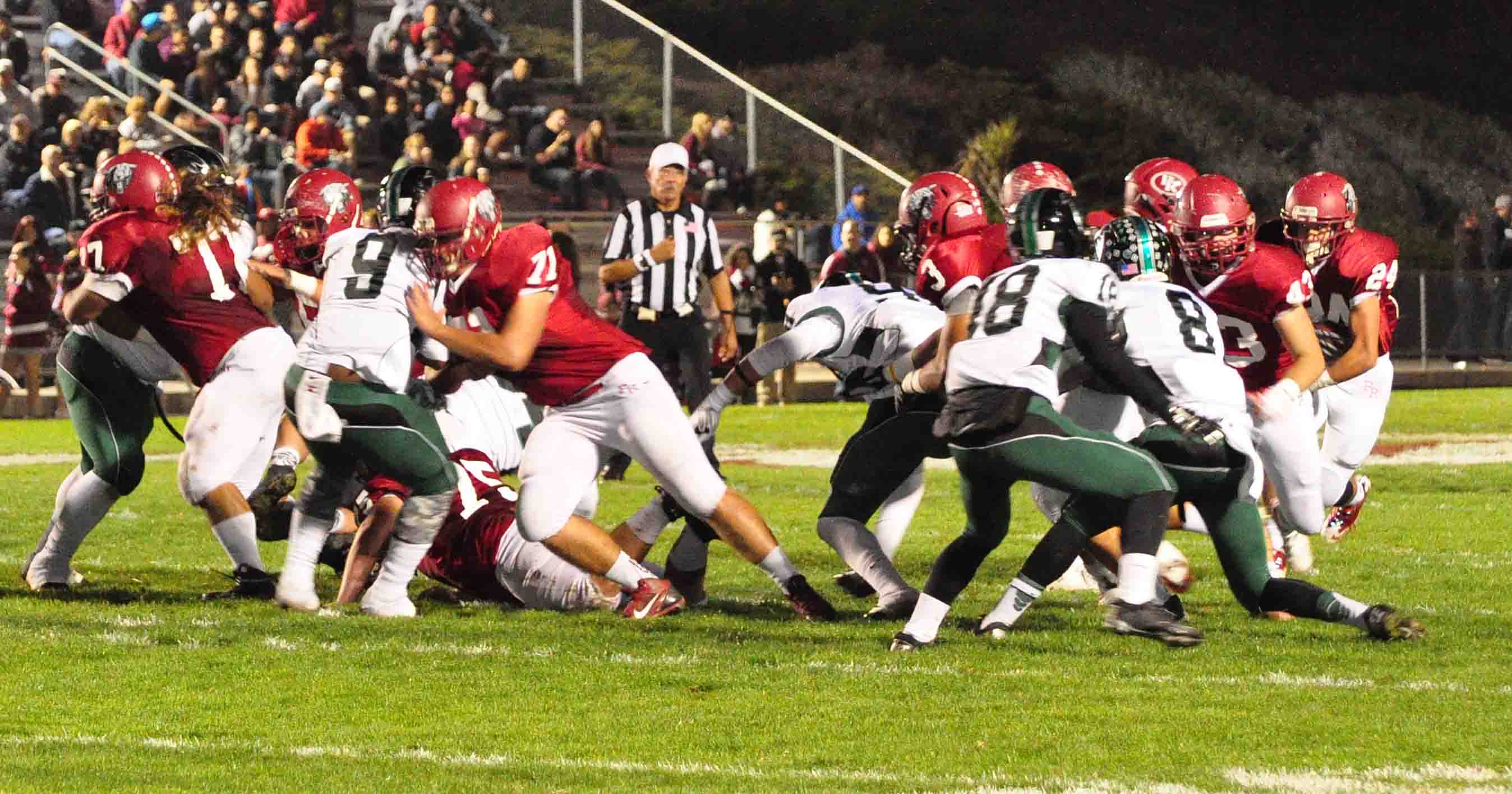 Paso Robles running back Robert Mares, far right, sneaks past the Palmdale Falcons during the Bearcats’ 49-16 victory in the second round of the CIF Northern Division, Southern Section football playoffs. Photo by Meagan Friberg 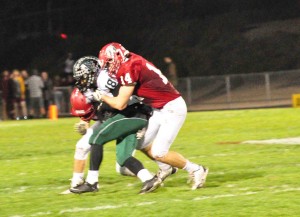 Paso’s Jonathan Baldwin and a fellow Bearcat bring down a Palmdale player. Photo by Meagan Friberg

In a game that was predicted to be a battle between two highly-ranked football teams, the Palmdale High School Falcons proved to be no match for the Paso Robles High School Bearcats on Friday night, with Paso handing Palmdale a stunning 49-16 defeat.

“The point difference was totally unexpected,” said Rich Schimke, PRHS head varsity football coach. “I thought it was going to be a battle back and forth all the way to the end.”

The Falcons were 7-0 in the Golden League and 10-1 overall as they traveled to War Memorial Stadium to take on the Bearcats in the second round of the CIF Northern Division, Southern Section football playoffs. The Bearcats were 3-1 in the PAC-5, 10-1 overall, and were coming off an impressive 42-14 victory over Royal High the previous week. 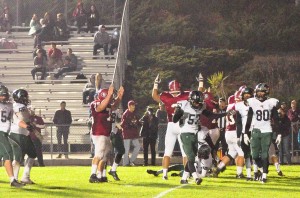 The Bearcats celebrate one of Bailey Gaither’s five touchdowns against Palmdale. Photo by Meagan Friberg

The Bearcat defense set the tone early when they stopped the Falcons on their opening drive. Paso had the ball at their own 35 yard line and methodically marched down field in what would be their first of seven successful offensive possessions. Paso QB Justin Davis capped the drive with a 12-yard run for a touchdown and, with Bryce Pasky adding the PAT, the Bearcats took an early 7-0 lead.

“We started out very focused defensively and we rode the wave from there,” said Schimke. “Overall, the team’s confidence has improved and I think that we are currently maximizing our potential.”

Palmdale advanced to their own 46 yard line, were stopped by the Bearcats’ defense, and punted out of bounds to give the Bearcats the ball at their own 30 yard line. The Bearcats found ways of getting the ball into the hands of Gaither, having him run as a tailback in the backfield. On the first play of the second quarter, Gaither took the hand off from Davis, followed his blockers to the left, and scored the first of his five touchdowns on the night. The PAT was good and the Bearcats led the Falcons, 14-0. 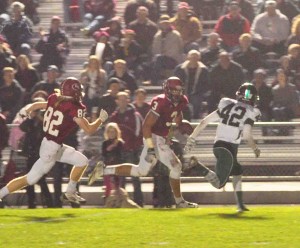 Paso’s Josh Oliver, with Ty Jones close by, moves the ball down the field for the Bearcats. Photo by Meagan Friberg

The Falcons put together a drive that took them to the Bearcats’ 43 yard line, but once again were forced to punt. The Falcons were unable to stop the Bearcats as they drove from their own 15 yard line. After a 27-yard pass from Davis to Josh Oliver, the Bearcats had the ball at the 7 yard line. Gaither took the hand off from Davis, sprinted into the end zone to give Paso a 21-0 lead. Gaither was a one-man show, ending the night with eight catches for 150 yards and two TD’s, and had 40 yards rushing with another three TD’s.

Paso stopped the Falcons again and forced another punt out of bounds at the Bearcats’ 35 yard line. A pass from Davis to Mares gained 16 yards and, on the next play, Mares took the hand off, ran to his left and down the sideline before being tackled at the Falcons’ 16 yard line. Proving that “you can’t get too much of a good thing,” the Bearcats once again used Gaither as a running back — and the hometown crowd roared as he lined up as the tailback, took the hand off from Davis, followed his blockers, and scored his third touchdown. 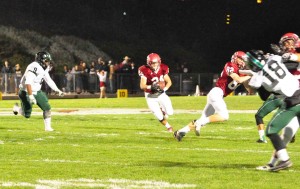 Bearcat Robert Mares had 12 carries for 87 yards and added 4 catches for 31 yards. Photo by Meagan Friberg

The second half began with Palmdale kicking off to Paso Robles. Gaither finally got a chance for a return and ran it 25 yards to the Bearcats’ 40 yard line. The Bearcats continued to have their way with the Falcons and drove the ball to the Palmdale 29 yard line. On a fourth down and eight yards to go, Davis threw a perfect pass to a wide open Gaither on a post pattern for his fourth touchdown. The PAT was good and Paso was on top, 35-0.

Mares ran for 13 yards to the 50 yard line and, on the next play, Davis passed to Gaither who caught it at the 5 yard line and cruised into the end zone for his fifth touchdown. Davis had a productive game, throwing for 235 yards and two TD’s and running for the first Bearcat touchdown. Mares finished with 12 carries for 87 yards and four catches for 31 yards. 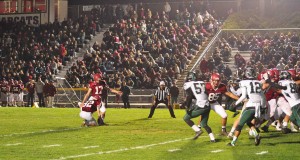 Paso High kicker Bryce Pasky was 7 for 7 on PATs in the Bearcats’ win over Palmdale. Photo by Meagan Friberg

The Bearcats scored touchdowns on their first seven possessions and simply overpowered the Falcons in every aspect of the game. They played a mistake-free game and had outstanding efforts on both offense and defense. The Bearcats second string made its presence known in the middle of the third quarter, highlighted by a standout performance by Zachary Phillips when he caught a screen pass, made several good moves, and raced 75 yards for the Bearcats’ final touchdown of the night at the end of the third quarter.

The Falcons kept their starters in and scored two touchdowns before handing the Bearcats a 49-16 victory. With the win, the Bearcats (11-1 overall) will hit the road Friday night at 7 p.m. to face Arroyo Grande (10-2 overall) in the CIF Northern Division, Southern Section football semi-finals. The Eagles defeated Lompoc 28-3 on Friday to advance. “Both teams are looking forward to a great game,” said Schimke. “I think it will be a classic.”