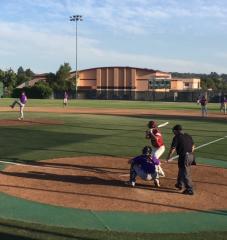 –The Paso Robles Bearcats lost to Righetti 9-5 Friday afternoon in Paso Robles. The Bearcats scored five runs in the second inning to take a 5-1 lead, but the Warriors battled back and took a four run lead. With two outs in the bottom of the 7th inning, Paso Robles loaded the bases, but failed to score.

The Bearcats and Warriors are now tied for the Pac-8 conference lead with identical 15-3 records, but the Warriors took two out of three from the Bearcats, so they win the tie-breaker. If each team wins their remaining games, the Warriors will be the top seed in the playoffs.