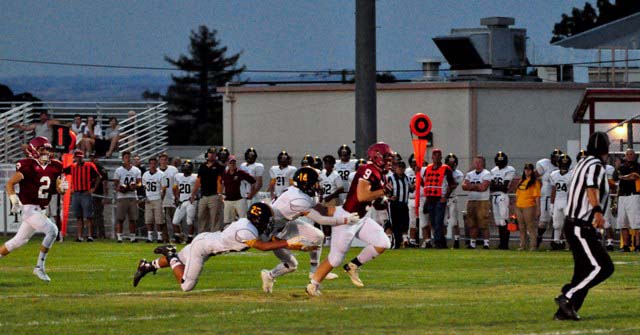 Paso Robles’ Mark Armstrong breaks tackles on his 75-yard touchdown run for the Bearcats’ in their 35-0 win over Cabrillo. Photo by Ron Friberg

–After losses to two high-ranked opponents, the Bearcats were looking for a win Friday night over Cabrillo. Putting together a balanced attack on offense, the Paso Robles defense outplayed their opponents and shut-out the visiting Conquistadores, 35-0, to the cheers of the hometown crowd. 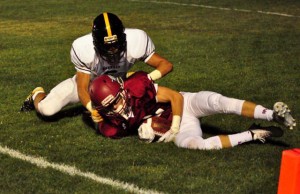 The game got underway at War Memorial Stadium following a tribute to the victims of the 9/11 attacks. A young team, Cabrillo (0-3) had just 11 seniors on the roster and was coming off of a 35-9 loss to Dos Pueblos the previous week. The Bearcats (1-2) got the scoring started late in the first quarter from their own 25-yard line when running back Mark Armstrong took an inside hand-off from quarterback Justin Davis, broke two Conquistadores’ tackles, and raced down the sideline for a 75-yard touchdown. The PAT was missed, giving Paso Robles a 6-0 lead with 2:02 left in the first quarter.

Early in the second quarter, Bearcat running back Christian Erickson had a 23-yard run, putting Paso Robles at the Cabrillo 31-yard line. Davis hit a wide-open Armstrong with a pass that he took to the 3-yard line before a Bearcat penalty brought the ball back to the 20-yard line. On the next play, Erickson took the hand-off from Davis and outran the Conquistadores’ defense for a 20-yard touchdown. After a failed two point conversion, the Bearcats led 12-0 with 8:25 left in the second quarter.

The Bearcat defense held and forced Cabrillo to punt; Paso Robles started their drive from their own 21- yard line and put together an impressive drive. With the ball at the Cabrillo 15-yard line on a fourth down and 5-yards to go, Davis threw a 15-yard pass to wide receiver Steven Schouten, who made an excellent diving catch two yards into the end zone for a touchdown. Another failed 2-point conversion attempt and the Bearcats took an 18-0 lead with 1:53 left in the first half.

Once again, the Bearcat defense held, and Paso Robles got the ball back at their own 35-yard line. A 40- yard pass from Davis to Schouten, who was being covered closely by a Cabrillo defender, put the Bearcats at the 15-yard line. Bearcat Jonathan Jaimes kicked a 32-yard field goal as time ran out, increasing the Paso Robles’ lead to 21-0 at the end of the first half. 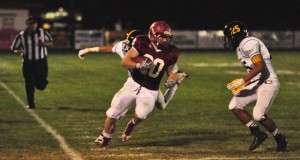 Late in the third quarter, the Bearcats had possession at their own 48-yard line when Davis dropped back and passed to Schouten, who caught the ball at the 18-yard line and ran untouched into the end zone for his second score of the game. Davis would finish the game with 14-20 for 208 yards passing with two TD’s. The 52-yard pass play and successful PAT had the Bearcats leading 28-0 with 2:22 remaining in the third quarter.

Cabrillo continued to struggle on offense and, when a pass from quarterback Matt Rocha was intercepted by Bearcat Josh Plale, it set Paso Robles up for a series of four plays that ultimately had Erickson running a sweep to the left and scoring his second touchdown of the game on a 10-yard run. Erickson would finish the game with 18 carries for 153 yards rushing and two TD’s for Paso Robles. The PAT was good and the Bearcats were up 35-0 as the third quarter came to an end.

The fourth quarter gave the Bearcats an opportunity to give playing time to their second string. They successfully held the Conquistadores (0-3), giving Paso Robles its first win of the season. 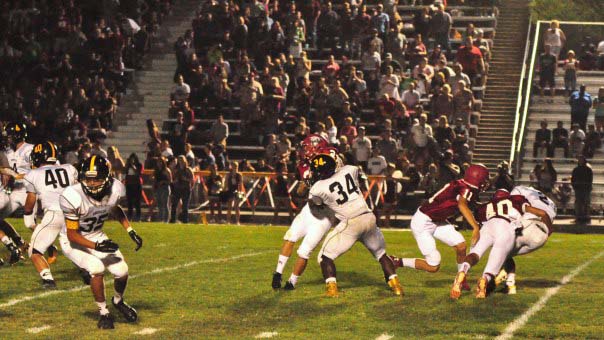 Mark Armstrong breaks into the secondary on a 75 yard TD run for the Bearcats. Photo by Ron Friberg 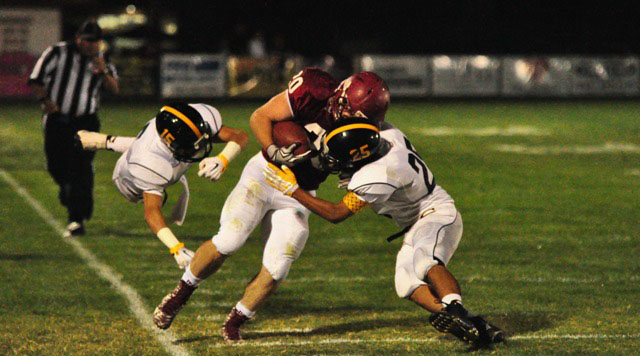 It takes more than one opponent to bring down Bearcat Christian Erickson. Photo by Ron Friberg 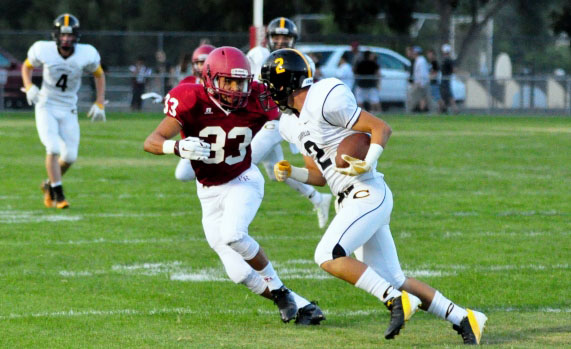 Bearcat Bryan Martinez moves in for the tackle. Photo by Ron Friberg