Bearcats travel to Porterville tonight to take on Monache High 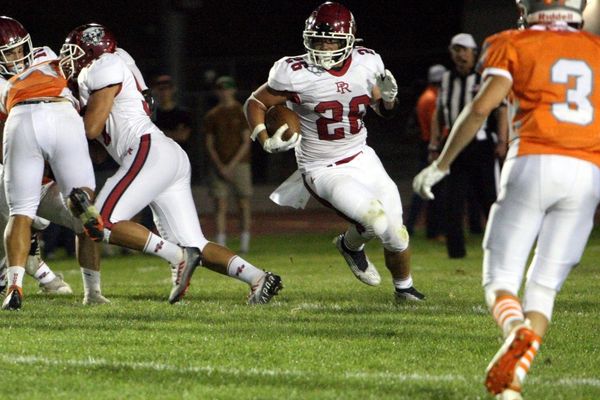 Game will be played at Granite Hills High School in Porterville at 8:15

The Bearcats are coming off a big win at Atascadero High School. Tied 25-25 at half-time, Paso Robles held the Greyhounds scoreless and scored a touchdown in each of the final two quarters to win, 35-21. Bearcat Coach Matt Carroll credits Leo Kemp and Connor Bowman for leading the team in rushing. Each scored two touchdowns. Isaiah Williams and Hayden McKanna each intercepted a Greyhound pass. Hayden returned his interception for a touchdown. The Bearcats play Monache at 8:15 Friday night at Granite Hills High School in Porterville.

“I would consider Leo Kemp to be the player of the week because of his effort on offense and the great work he did on defense including his stats in Tackle for Loss (4),” said Paso Robles High School Head Football Coach and English Teacher Matt Carroll.

The Greyhounds are set to rebound after a hard-fought battle at home against the Bearcats. Kane Cooks, Celtin Vert, and Mason Degna named players of the game for Atascadero. Next up, is Everette Alvarez High School in Salinas. The Alvarez Eagles are 1-1 for the season. Atascadero is looking for its first victory, but each game the Greyhounds have scored more touchdowns, and their opponents have been some of the best teams in the section. In the state rankings, the Greyhounds and Alvarez Eagles are not far apart. It could be an interesting game Saturday at 5 p.m. in Salinas at Everett Alvarez High School.

The Templeton Eagles travel to Firebaugh Friday night to take on those Eagles. Thursday night, Firebaugh residents turned out in force for the Rams-Bills game in LA. Family and a lot of fans traveled from Firebaugh to watch their alumnus, Josh Allen, lead the Bills over the Rams. Templeton Coach Don Crow says he’s glad Josh Allen is not playing for Firebaugh Friday night. He says the Firebaugh Eagles have a good sophomore quarterback, but the team is rebuilding after losing a lot of starters from an excellent team this year.

The Eagles have had good games from running backs Landen Miller and Anthony Chavez. Quarterback Noel Brady has traded off with Chavez and both quarterbacks have produced for the Eagles. Johnny Peschong and Lane Miller have excelled on defense, but it’s been a team effort, and there are too many outstanding players to list them all.