Bearcats unable to stop the Knights 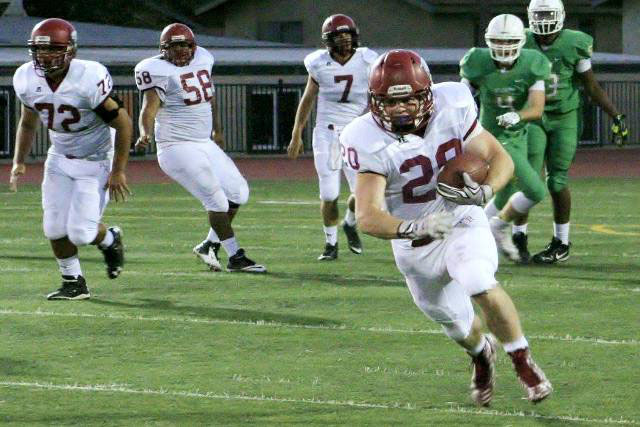 Paso Robles’ Christian Erickson brings the ball towards the end zone on his way to scoring one of his two touchdowns of the night against St. Joseph. The running back ran for over 300 yards on 42 carries in the Bearcats’ 49-31 loss to the Knights. Photo courtesy of Jennifer Railsback

– The Paso Robles Bearcats traveled to Santa Maria to take on the St. Joseph Knights in a non-conference game Friday night in what turned out to be a battle of the offenses with the Knights outscoring the Bearcats, 49-31.

The Knights (3-0) jumped out to an early 14-0 lead, scoring on their first two possessions. The Bearcats (1-3) cut the lead in half when running back Christian Erickson took the hand-off from quarterback Justin Davis and ran up the middle for a 63-yard touchdown with 1:12 remaining in the first quarter, making the score 14-7.

On their next possession, the Knights scored on a 66-yard touchdown courtesy of Mateo Becerra to put up a 21-7 lead over the Bearcats at the end of the first quarter. 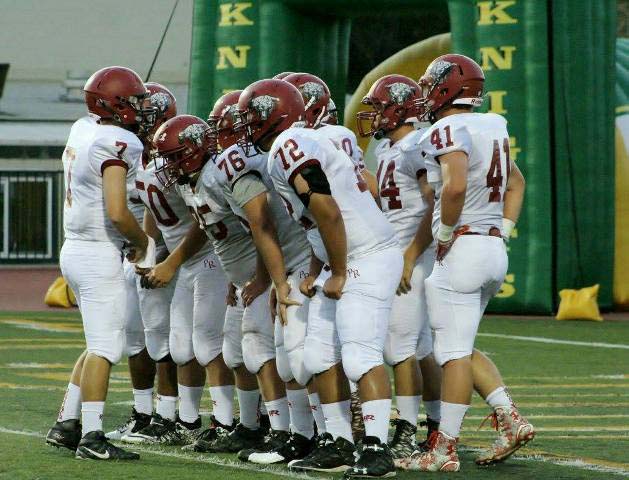 Bearcat quarterback Justin Davis goes over plays with his team. Davis scored two touchdowns for the Bearcats Friday night in their game against St. Joseph. Photo courtesy of Jennifer Railsback

The Bearcats were unable to move the ball and gave the high-powered St. Joseph offense another scoring opportunity when, after a 42-yard punt return by Joe Guzman, Saints quarterback Blake Jaeckels passed to wide receiver C.J. Cole for a 14-yard touchdown. The Bearcats were down, 28-7, as the game slipped away.

The Paso Robles offense relied heavily on the powerful running of Erickson, who would run for over 300 yards on 42 carries for the night. He scored his second touchdown of the night as he followed excellent blocking by his line, running 46 yards into the end zone and cutting the lead to 28-14 with 5:46 left in the first half. 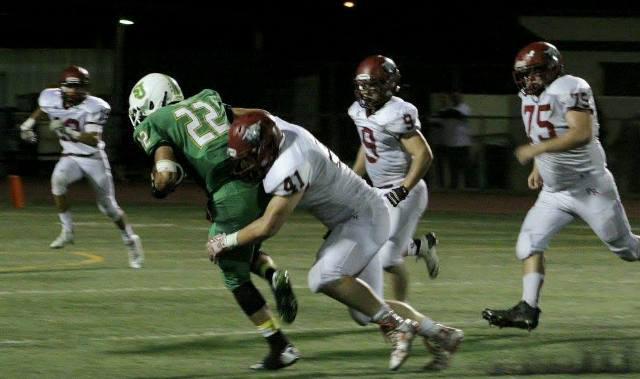 It took the Knights just 20 seconds to score again with Jaeckels outrunning the Bearcats for a 35-yard touchdown run. The Knights seemed unstoppable as they increased their lead to 35-14 with 5:27 left in the half.

The Bearcats put together an 80-yard drive led by the running of Erickson, with Davis scoring on a 1-yard run. The first half ended with the Knights leading 35-21.

After the Knights had scored on their first five possessions, the Bearcats defense held and forced the Knights to punt. A poor punt gave the Bearcats the ball with excellent field position at the St. Joseph 48 yard line. Erickson would once again lead the Bearcats down to the 2-yard line, with Davis running the ball in for his second touchdown of the night.

With the Bearcats down by just seven points, they seemed to have gained momentum. Unfortunately, it didn’t last long with the Knights scoring two more touchdowns, the last on a 91-yard touchdown pass from Jaeckels to Cole. Paso Robles, unable to stop St. Joseph consistently throughout the game, lost by a score of 49-31.

The Bearcats will host the Nordhoff Rangers (0-4) on Friday, Sept. 25 at War Memorial Stadium, with the JV game set to start at 4 p.m. followed by the varsity at 7 p.m.

For more of Jennifer Railsback’s photos from the game check out the 2015 PRHS Varsity Bearcat Football page on Facebook.