Paso Robles News|Friday, February 3, 2023
You are here: Home » Entertainment » ‘Behind the Ides’ premieres at Cuesta College May 3-12

‘Behind the Ides’ premieres at Cuesta College May 3-12 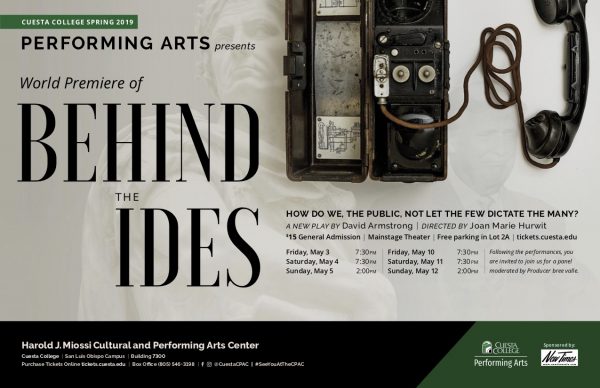 –On the heels of winning ten national awards from the Kennedy Center for Ghost Ship, Cuesta Drama is hitting the mainstage with its spring production of Behind the Ides. The new docu-style original play, written by David Armstrong and directed by Joan Marie Hurwit, will have its world premiere May 3 – 12 at the Harold J. Miossi Cultural and Performing Arts Center at Cuesta College.

From the perspective of box office call operators, Behind the Ides follows the backlash New York City’s The Public Theater received during the summer of 2017 with their Shakespeare in the Park production of Julius Caesar. The company chose to portray the title character as President of the United States Donald Trump, which brought on a firestorm of reactions from across the country.

“Behind the Ides explores how one artistic choice sparked a cascading conversation about the role and responsibility of art in politics, and how plays like Julius Caesar and our own can be used to navigate a politically-charged climate while still maintaining our humanity,” says Hurwit, who is making her Central Coast directorial debut.

Most of the calls and voicemails depicted in the production are transcribed verbatim from actual people and contain graphic language, descriptions of mutilation, and swearing. Parental guidance for audiences under the age of 13 is suggested.

The production includes post-show conversations immediately following each performance during opening weekend May 3 – 5. The discussions, moderated by producer Bree Valle, will feature a panel of special guests including New York City playwright Armstrong along with professors, political experts, and industry professionals from the local area and state.

General admission tickets are $15 and are available online at tickets.cuesta.edu.