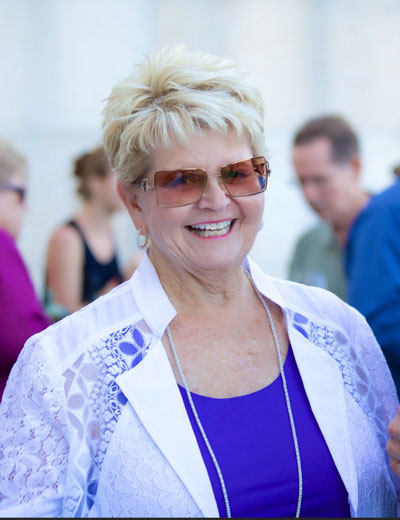 Betty L. Scott of Templeton passed away surrounded by her family at Twin Cities Community Hospital Friday, Nov. 2. She was 73. She died of complications related to Sepsis.

Betty was born Nov. 10, 1944 in Monterey Park, Calif. to Alfred and Louise Clark of Kansas City, Kansas. She was raised with her brother Larry Clark and sister Joanne Hovey.

She attended Resurrection Catholic School, Stevenson Junior High, and Garfield High School, in Los Angeles, where she graduated in the Class of 1963. She lettered on the high school drill team.

While in high school, Betty worked for Whittier Distributors, a liquor company, and at Bushnell Typewriter, so she could afford her 1964½ Hi-Po Ford Mustang.

She married her life-long love, Lyle Patrick “Pat” Scott, on May 1, 1965 at The First Methodist Church in Montebello, Calif. They raised a family in Whittier, Calif., with son Ronald Scott and daughter Suzanne Scott.

Betty worked most of her life in the family business, NC Dynamics, a successful aerospace machine shop company in Long Beach, Calif. The couple started the company with partners Randy and Vicky Bazz in 1979. She retired from NC Dynamics in 2010.

In 1993, Pat and Betty started an aftermarket lighting company, Lazer Star, with their son Ron. Their daughter Suzanne later joined the firm and they relocated the business to Paso Robles.

The couple moved to Templeton to be close to family and friends and enjoy Lake Nacimiento, the family’s long-time summer vacation getaway.

Betty loved to shop and travel. She enjoyed many things throughout her life including going to Hawaii, Glamis, to the Colorado River, and boating with the family, from which the origins of family lore regarding a trip to Lake Powell and a storm that scared everyone to bits began. Betty’s favorite thing however was spending time with her family and most importantly supporting her grandbabies in all that they did, whether it was a cheer competition in Palm Springs for Mandi or Nutcracker performances for Ginger, Betty was always there.

She is also survived by her many close friends, including Bob and Marsha Jacinto, Tom and Kathy Pipkin, Ken and Cindy Beavauis, Bob and Nancy Crenshaw; Russ and Nancy Gosting, Bob and Irene Riley, Steve and Diana Hooton, Mike Stretch, Ron and Kaye Bertram as well as all of their many children that became friends to Betty.

A celebration of Betty Scott’s life will be held Nov. 29, at 2 p.m. at the Paso Robles Golf Club. For information, call son-in-law Ryan Paine at 562-618-8017. In lieu of flowers or gifts please make a memorial contribution to the Sepsis Alliance in her name at https://www.justgiving.com/fundraising/bettyscott.

Pat and the family would like to thank all their friends, family, and co-workers who have showed their support. “We cannot thank everyone enough for the visits, messages, cards, phone calls, prayers, food, and kindness. Your support has been overwhelming. A special thank you to Bob and Marsha for being there for those crucial first few days, to the crew at the family business and especially to Tim, Kyle, and Rob who handled everything while away at an event allowing us to leave immediately and be with our family and Mom… You may never know how much it meant. “