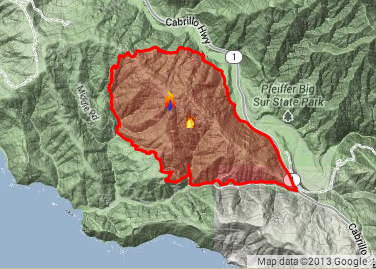 The Pfeiffer Fire at Big Sur was declared 100-percent contained by the US Forest Service Friday night at 7:09 p.m. The total acres burned amounted to 917 of chaparral and heavy timber. A total of 34 structures burned.

Incident overview from the USFS

The Pfeiffer Fire started on Dec. 17, 2013 around midnight in the vicinity of Pfeiffer Ridge in the Monterey Ranger District of Los Padres National Forest. The fire has burned 917 acres and is 100 percent contained. Thirty four (34) residence and 4 outbuildings have been damaged/destroyed. Damage assessment teams have completed their preliminary evaluation of damaged/destroyed property. The number of structures given reflect the structures documented as of December 20 2013. The evacuations of Pfeiffer Ridge Road remain in effect and include the following: Sycamore Canyon Road on the south to Clear Ridge on the north Highway 1 on the east and the Pacific Ocean on the west. The following road closures are still in place: Clear Ridge Road Pfeiffer Ridge Road and River Inn to Pfeiffer Ridge Road. The evacuation watch for the area west of Highway 1 between Fernwood Resort and River Inn remains in effect. Andrew Molera State Park is Closed this evening the Pfeiffer was declared contained.

Due to increased temperatures and lower relative humidity fire activity inside the perimeter will be more active during today’s operational period and smoke may be visible.

PG&E will continue to work along Sycamore Road and Pfeiffer Ridge Road. They will be using helicopters to transport material into the burn area. 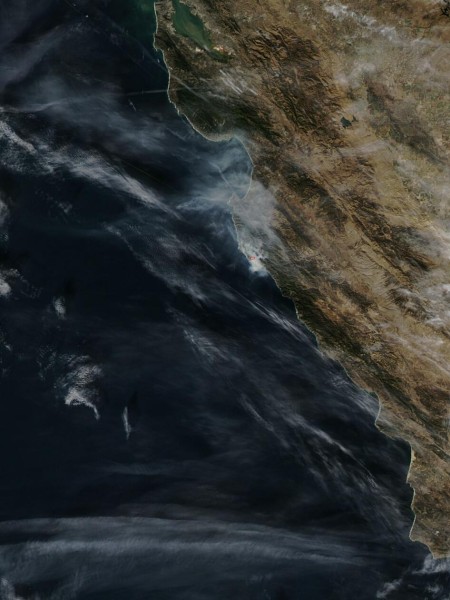 The Big Sur fire is now 74-percent contained with over 900 acres burned. There are 900 firefighters on the scene and the cost of fighting the blaze is near $1 million, according to the US Forest Service.

The Big Sur fire at Pfeiffer Ridge continues to burn acres of national forest wildland and destroy buildings. The Weather Channel reports more than 800 firefighters are battling the unusual late fall wildfire that has destroyed more than a dozen homes and forced about 100 people to flee the Big Sur area along the Pacific Ocean.

The fire in the Los Padres National Forest off Highway 1 had consumed 769 acres, about a square mile. By Tuesday night it was 20 percent contained. The fire has destroyed 22 buildings. About 14 of those structures were homes, authorities said.

The fire is visible from space, as can be seen in the National Weather Service photo at top. Its flames light up the sky and can be seen from space at night as well. 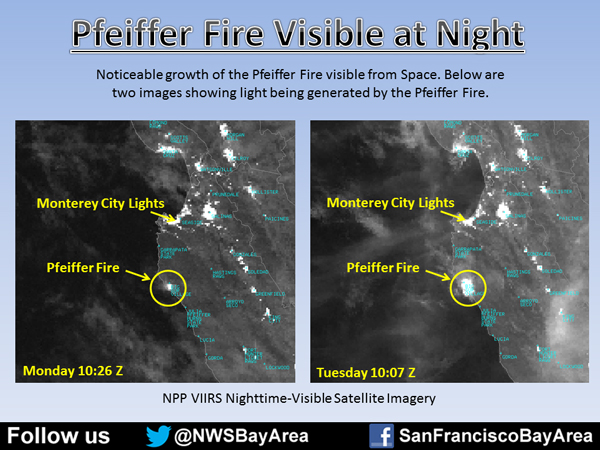 National Weather Service graphic of the Big Sur Fire from space at night.

The US Forest Service and Cal Fire are fighting a fast growing fire off Highway 1 and Pfeiffer Ridge Road near Big Sur in the Los Padres National Forest on the Monterey County side. At least 300 firefighters are now on the scene, according to reports. It

The fire quickly spread from 100 to 550 acres since it started Sunday night, according to a local firefighter. Engines, dozers and a strike team of fire crews from Cal Fire responded to the blaze early Monday morning. The location is about 70 miles northwest of Paso Robles and 30 miles south of Monterey.

The wildfire forced the evacuation of over 100 local residents. At least fifteen homes had burned down by Monday evening, according to media reports, including the home of Big Sur Fire Chief Martha Karstens. No injuries have been reported.

Although fires are unusual for December, the area has faced the driest year on record.