Board of supervisors approves $4.8 million to restore Cayucos Veterans Hall 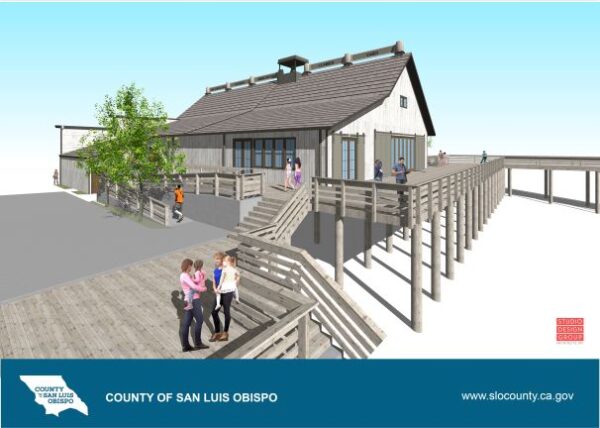 After sitting empty six years, rehabilitation can begin on the historic building

– In a 5-0 vote, the San Luis Obispo County Board of Supervisors unanimously approved accepting funding from multiple sources to be used to rehabilitate the Cayucos Veterans Memorial Hall.

With today’s vote, supervisors accepted an additional $4.8 million in grants and donations and approved moving forward with the Cayucos Veterans Hall Rehabilitation project. This funding, together with the previously accepted $2.2 million in grants, allows the county to begin rehabilitation of the project by utilizing a total of $7 million dollars in grants and donations. The project is expected to take 14-18 months to complete with the total cost expected to be just over $11 million.

The Cayucos Veterans Hall, formerly the Cass Warehouse, located at the base of the Cayucos Pier, a popular tourist area, was constructed in 1873 by Capt. James Cass. In recent years, the facility has been an important community and event center, though it was deemed structurally unsound in 2016 and has sat empty ever since.

Full rehabilitation of the facility and surrounding site will restore a central piece of Cayucos’ history and heartbeat of the community where residents and visitors have gathered for special events for many years.

The various funding sources for the project include state grants, community donations, and bond sale revenue.

“Completion of this project is one more example of our county’s commitment to providing projects and services to its residents and is made possible due to partnerships with other leading agencies and the Cayucos community,” said Public Works Deputy Director John Waddell. “Rehabilitating this important historic site will help us preserve a key era in our county’s history for the next generation, not just for Cayucos, but for all of us.”

In a letter from a preservation officer with the California Office of Historic Preservation, the officer wrote that the warehouse is a rare example of its type and that “The Cass Warehouse is the only surviving mid-late 19th-century maritime warehouse still associated with its wharf in the state of California.”

“This has been a long and winding road – six years of closure of the Cayucos Vets Hall. The community of Cayucos, once again, has stepped up in remarkable ways,” said District 2 Supervisor Bruce Gibson. “This also wouldn’t have happened without the diligence of Sen. John Laird and county staff – I thank you for all of your efforts that have gotten us to where we are.”