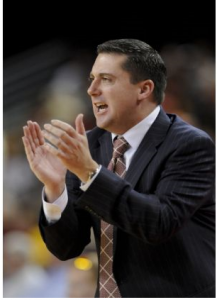 Cantu was a three-year varsity player at Paso Robles High School and started his basketball coaching career at Mission Prep, Cuesta College and Cal Poly. He is now entering his 19th year as a college coach and his third year as assistant coach at University of Texas at El Paso. Cantu had spent the previous 12 seasons at USC as an assistant coach, associate head coach, and as interim head coach for the final 15 games of the 2012-13 season.

Cantu has participated in 10 postseason tournaments as a collegiate coach, has recruited and/or coached several current and former NBA players. “I’ve enjoyed an exciting and successful coaching career and have been very fortunate to be able to do what I love for a living. I want to give back to the community where it all began by creating awareness and support for the PRHS boys basketball program.” says Cantu. “I’m hoping to connect former players of all classes to share their stories over food and drinks, so please join us and bring a guest. Go Bearcats!”

Participation in the event is free, however donations to help support the basketball program will be accepted.

For more information or to RSVP for the social, please message Cantu on Facebook at https://www.facebook.com/bob.cantu or contact Russell Baker at (805) 221-5622.