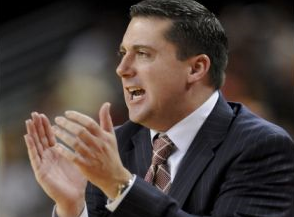 The event raised over $2,000 in donations that will go directly toward supporting the Paso Robles High School boys’ basketball program.

“It was great to see former Bearcats from different eras gather together on Saturday,” said Cantu. “I am excited that we raised over $2,000 for the PRHS boys basketball program. I want to thank Superintendent Chris Williams, School Board Member Joel Peterson, Coach Scott Larson and Coach Matt Drake for their participation and support. I would also like to thank all of those former players and their guests who attended, and ask them to help promote and recruit other former players to attend our next event in June 2016.”

Cantu was a three-year varsity player at Paso Robles High School and started his basketball coaching career at Mission Prep, Cuesta College and Cal Poly. He is now entering his 19th year as a college coach and his third year as assistant coach at University of Texas at El Paso. Cantu had spent the previous 12 seasons at USC as an assistant coach, associate head coach, and as interim head coach for the final 15 games of the 2012-13 season.

Cantu has participated in 10 postseason tournaments as a collegiate coach, has recruited and/or coached several current and former NBA players.