The scene from 8th Street looking toward Riverside Avenue at 12:50 p.m. on Tuesday afternoon. Photo by Marc Coons.

–On Tuesday at approximately 12:37 p.m., Paso Robles Fire and Emergency Services responded to a report of a smoke check at 825 Riverside Ave. in Paso Robles, adjacent to Big Creek Lumber.

First arriving firefighters found light smoke showing from the roof of a two-story commercial structure. Firefighters called the incident a working fire and ordered additional resources. Because of the square footage of the building and the difficulty in making access to the fire unit, a second alarm response was requested. The fire was contained to the unit of origin with smoke damage to two other units.

A total of 30 firefighters responded to the incident. The Paso Robles Police Department assisted with traffic control and animal evacuations of a dog grooming business in the same complex.

An eyewitness reported the fire was at a unit occupied by Green With Envy Landscaping.

The cause of the fire is currently under investigation, according to Paso Robles Battalion Chief Brian Lewis. 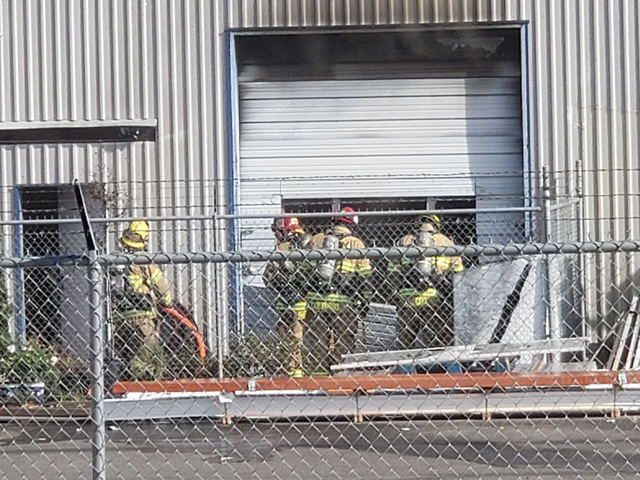 Paso Robles firefighters at a roll-up door behind a building on Riverside Avenue shortly after 1 p.m. Photo by Laurie Bryant.