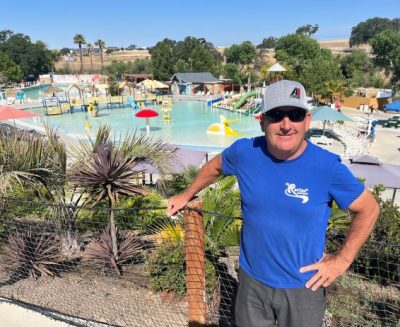 Brett Butterfield at The Ravine.

– The Paso Robles and Templeton Chamber of Commerce has announced its 2022 Roblan of the Year and 2022 Citizen of the Year, as well as the Beautification Award and Business of the Year. All will be honored at the annual chamber gala being held Saturday, Feb. 11, at Rava Wines. In addition, the chamber will thank their outgoing board members, install their 2023 board, and hold a silent and live auction with auctioneer Todd Ventura.

Their 2022 Roblan of the Year Brett Butterfield is co-owner of The Ravine Water park, where he employs about 265 people each year. He is a local entrepreneur and community advocate, having been here since second grade. His family set deep roots in Paso Robles’ agriculture community with their ranch off North River Road. He attended local schools: Winifred-Pifer, Bauer-Speck, Paso Robles High School, and graduated from Cal Poly SLO in 1983.

While he lived throughout the country during his early adult years, he eventually found his way home and never left. His resume of involvement includes such notable organizations as Paso Robles Main Street Association, the Paso Robles Chamber of Commerce, California Mid-State Fair Heritage Foundation, and Paso Robles Rotary Club. As longtime friend Mark Perry put it, Butterfield is “fearless, he’s funny, he’s got a great sense of humor, and he likes to laugh. He loves Paso Robles and giving back to the community.”

The Templeton Chamber of Commerce has annually bestowed a Citizen of the Year award to an individual who makes significant contributions to the community. With the merging of the two chambers in 2022, the newly combined organization felt it was important to continue to honor this tradition. Courtney Morrow has been named their 2022 Citizen of the Year for her commitment to the community, giving special attention to youths by sponsoring multiple sports teams and groups in our area. She is a past president of the Templeton Chamber of Commerce.

At the age of 19, Courtney joined the Army as a public affairs broadcaster. She spent time at the Yokota Air Base in Japan, where she had an evening radio show and co-hosted a morning radio show. She also spent time at Soldier’s Radio and Television in the Military District of Washington, D.C. Morrow returned to California in 2009 and by 2014 had opened her first State Farm agency, now with two locations, one in Templeton and one in San Luis Obispo.

The Beautification Award is presented to a business that has enhanced or preserved the beauty and heritage of Paso Robles. A-1 Glass is the recipient of this award for their extensive beautification of the old mechanics building just off the freeway at the Paso Robles Street exit, one of the gateways to the city. Since the completion of the project, people have stopped into the showroom to thank owners, Bryan Carroll and his wife, Sophia Stephens, and compliment them on the transformation.

The public is invited to join the chamber in welcoming its 2023 board and honoring Butterfield, Morrow, A-1 Glass, and Jack’s Bar and Grill during the annual gala on Saturday, Feb. 11. Visit www.pasorobleschamber.com or call (805) 238-0506 for ticket information and additional details.