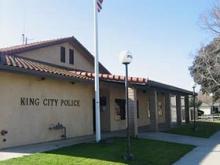 A six-month investigation of the King City Police Department resulted in the arrests of six officers and one civilian this morning. The Monterey County District Attorney’s office announced bribery, embezzlement, and several other charges during an afternoon press conference today in Salinas.

The only civilian in the mix, Brian Miller of Miller’s Towing, was booked on conspiracy to commit a crime and bribing an executive officer.

The investigation revealed evidence of a scheme to provide those involved with free cars impounded by officers within the department.

“The victims were economically disadvantaged persons of Hispanic descent who were targeted by having their vehicles impounded, towed and stored by Miller’s Tow,” according to the Monterey County District Attorney’s office. “The vehicle owners were unable to pay the fees and the vehicles were sold or provided for free to some of the officers.”

The district attorney’s office reported evidence that Sgt. Carrillo impounded more than 200 vehicles during the investigation, with nearly 9 out of 10 of those impounded by Miller’s Towing. Department rules called for distributing impound and towing contracts equally among the city’s four towing companies. Brian Miller is charged with distributing several of those impounded vehicles to Carrillo, free of charge.

The 13,000 residents of King City are now faced with a diminished police force, and a department discredited by corruption charges. Monterey County Sheriff Scott Miller says he wants those concerned over protection and service issues to know he’s in communication with city officials to “ensure that public safety is not compromised during this difficult time.”

Arraignment of the defendants is scheduled to start Monday.