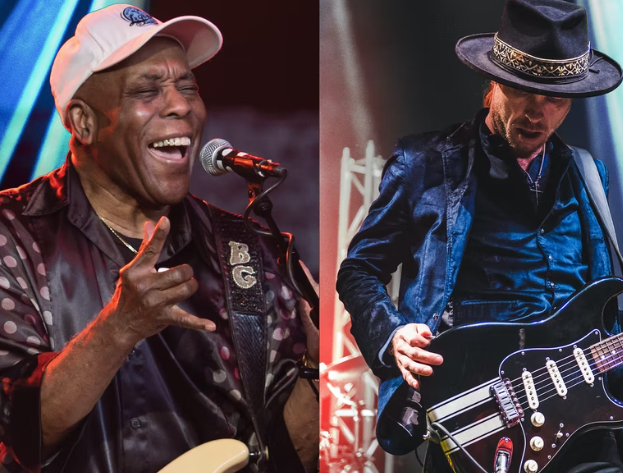 At age 82, Buddy Guy is a Rock and Roll Hall of Fame inductee, a major influence on rock titans like Jimi Hendrix, Eric Clapton, and Stevie Ray Vaughan, a pioneer of Chicago’s fabled West Side sound, and a living link to the city’s halcyon days of electric blues. Guy has received seven Grammy Awards, a 2015 Lifetime Achievement Grammy Award, 37 Blues Music Awards (the most any artist has received), the Billboard Magazine Century Award for distinguished artistic achievement, a Kennedy Center Honor, and the Presidential National Medal of Arts. Rolling Stone Magazine ranked him #23 in its “100 Greatest Guitarists of All Time.”

The Louisiana-born axeman and songsmith Kenny Wayne Shepherd has sold millions of albums while throwing singles into the Top 10, shining a light on the rich blues of the past and forging ahead with his own modern twist on a classic sound he has embodied since his teens.

In a 20-year recording career that began when he was just 16, Shepherd has established himself as an immensely popular recording artist, a consistently in-demand live act and an influential force in a worldwide resurgence of interest in the blues.

Shepherd has performed on The Tonight Show with Jay Leno, The Late Show with David Letterman, Jimmy Kimmel Live, and Late Night with Jimmy Fallon (amongst others) to features in Rolling Stone, Vanity Fair, Maxim Magazine, Blender, Spin, USA Today and more.