North County resident Byron Curtis Devendorf passed away March 13, 2015 in Arcadia, Calif., due to complications from a fractured hip. He was 91. A memorial service will be held at Bethel Lutheran Church in Templeton, California on May 30, 2015 at 1 p.m. where he was an active member for many years. 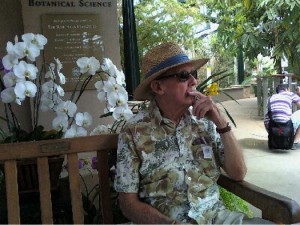 Also known to family as Raymond, he was born July 19, 1923 to Forrest and Julia (Nelson) Devendorf in Detroit, Michigan. He served as a medic in the Philippines during World War II, and later attended Woodbury University in Los Angeles. On June 30 1951 he married Ann Marie Jensen. He loved being a part of the Jensen family and having many sisters and brothers in law.

Devendorf enjoyed photography, golf, cycling on the Central Coast, and gardening, and had the ability to bring enthusiasm to any new venture.

He is survived by his daughter Lisa Copeland of Monrovia, his cousin Betty Richter of Virginia Beach, many sisters and brothers in law, and many nieces and nephews who knew him as Uncle Deve. Memorials may be given to Disabled American Veterans.