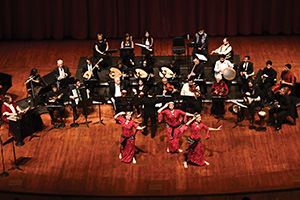 – The Cal Poly Arab Music Ensemble and Chookasian Armenian Folk Ensemble will perform a program of music and dance from the Eastern Mediterranean and larger region at 7:30 p.m. Saturday, Feb. 19, in the Performing Arts Center on campus.

The Cal Poly Arab Music Ensemble, which is a combined orchestra and choir with vocal and instrumental soloists, will be joined for the second time by the internationally acclaimed Chookasian Armenian Folk Ensemble. The group consists of artistic director John Chookasian on clarinet, Barbara Chookasian on vocals and hand drum, Frank Giordano on guitar, John Martin on hand drum, Ishmael on qanun, and Paul Ohanesian on oud.

The first half of the show will include some of the most celebrated repertoire of Arab art and popular music. Preeminent composers, poets, and artists include Fairuz, Ibrahim al-Aryan, Philemon Wehbe, Samira Tawfik, Sayyid Darwish, Ziad Rahbani, and renowned 14th-century poet Ibn al-Khatib.

The second half of the program will include a presentation of Armenian folk music in ensemble and solo formats and in a variety of vocal and instrumental genres. Distinguished composers and artists to be represented include Edward Bogosian, Khachatur Avetissyan, Kousan Ashod and Tatoul Altounian.

The concert will feature contemporary works and traditional genres, such as the muwashshah, a genre of poetry and song that has traveled throughout Arab society from its origins in the artistic milieu of 10th-century Andalusia. The program also will feature selections from the shared traditions of the Ottoman era, including pieces having 10- and 11-beat metric modes. Improvisation, vital to music across West Asia North Africa, will also figure prominently in the program.