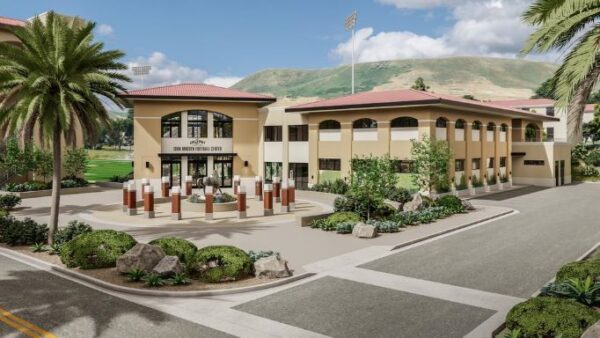 – Cal Poly and the family of alumnus and NFL Hall of Fame coach and commentator John Madden have announced the John Madden Football Center, a new home for Cal Poly Football.

Led by President Jeffrey D. Armstrong and Head Football Coach Beau Baldwin, Cal Poly has worked for the past few years with John Madden and his son, Mike, to envision a new headquarters for the university’s football program. Thanks to the Madden family’s support and engagement, in two years, Cal Poly football fans will see the center come to life beyond the south end zone at Alex G. Spanos Stadium.

The project was publicly announced by Virginia Madden, John Madden’s wife, and Cal Poly alumna, along with her sons, Mike and Joe, and grandson, Jack, at halftime of Cal Poly’s Big Sky Conference football game on Oct. 1 against Sacramento State. John Madden, who played football and baseball at Cal Poly in the late 1950s before embarking on a long coaching and broadcasting career in the NFL, passed away in December at 85.

The $30 million project will feature 30,000 square feet of space over two stories that will include a locker room; hall of champions; strength and conditioning facilities; fueling station; team lounge; offices for coaches, equipment personnel, and athletic trainers; and a team meeting room with tiered theater-style seating for 125 players.

“We are certain the John Madden Football Center will be a transformative facility that elevates every aspect of Mustang football,” said Mike Madden. “It will be a centralized home for the entire football community — a state-of-the-art facility for current and future Mustangs, designed to develop their physical and mental skills and provide a place to gather with teammates to study or relax. Further, it will afford coaches regular interaction with current Mustangs, while also being an attraction to help recruit the best future players.”

Designed to complement the Mission Revival architecture of Spanos Stadium, the center will welcome visitors into a spacious first-floor lobby complete with a hall of champions, including comfortable furnishings and a collection of wall treatments and exhibits celebrating 100-plus years of great moments of Mustang Football.

“Cal Poly Athletics, and specifically the Football Program, is the front porch of Cal Poly. Investing in the program where alumni and the local community can be proud of their achievements will lead to a deeper engagement and nurture a pride that provides alumni more reasons to come back to Cal Poly,” Armstrong said. “And as we planned the facility, Coach Madden was focused first and foremost on the health, well-being and overall experience of football players. This will be a facility for our student-athletes, designed and planned by the best coaches.”

Baldwin said the new building will take the football program to new heights in its ability to develop players, both mentally and physically.

“It shows that we’re not just an incredible university with a great academic history, but also that we’re committed to building a championship-level football program,” Baldwin said. “We had the opportunity to watch a few football games with John, and it was amazing to listen to him talk about the game — after all those years as a commentator, deep down he was still a coach first. Ultimately as a coach you’re a teacher, and he wanted to do something special to really help our players develop.”

The front entrance of the John Madden Football Center will face Mustang Memorial Plaza, which honors the lives of 16 players and the team manager who lost their lives in a plane crash on Oct. 29, 1960, in Toledo, Ohio. The memorial was a place very important to John, as many of his friends and teammates were on that flight.

“This amazing commitment from the Madden Family will help lead the charge for our entire Cal Poly community to get behind this project, and support championship football here on the Central Coast,” said Mustang director of athletics Don Oberhelman.

Including the lead donation by The Madden Family, 80 percent of the funding for the new center has been secured. A total of $6 million still needs to be raised. Those wishing to be a part of the project should contact Senior Associate Director of Athletics for Development Ashley Offermann at (805) 440-9792 or by email at aofferma@calpoly.edu.

Find out more about the project at www.mustangathleticfund.com/Madden.