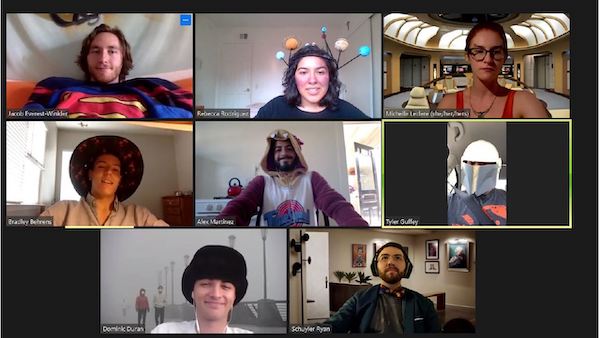 The Cal Poly team, all mechanical engineering seniors from California, for the second straight year has advanced to the semifinals of a NASA challenge to develop a device to harvest water from ice on the moon and Mars that could pave the way for extended manned space missions. Top row, from left: Jacob Everest-Winkler of Santa Rosa; Rebecca Rodriguez of Buellton; project manager Michelle Leclere of Roseville; middle row: Bradley Behrens of Nipomo; Alex Martinez of Rocklin; and Tyler Guffey (in helmet) of San Bernardino; and bottom row: Dominic Duran of Woodbridge; and Schuyler Ryan of Redding.

–For the second straight year, a team of Cal Poly mechanical engineering seniors has advanced to the semifinals of a NASA challenge to develop a device to harvest water from ice on the moon and Mars that could pave the way for extended manned space missions.

NASA and the National Institute of Aerospace announced that Cal Poly was among a dozen teams from universities across the nation named to the next round of the 2021 Revolutionary Aerospace Systems Concepts — Academic Linkage (RASC-AL) Special Edition: Moon to Mars Ice & Prospecting Challenge. The finalists will design, build, and test prototype systems capable of extracting water from ice deposits buried beneath a simulated lunar or Martian soil.

The Cal Poly entry is named Sub-lunar Tap Yielding eXplorer and Surface Telemetry Operations and Next-generation Excavation System, or STYX & STONES, in the 2020-21 challenge. It is just the second time the university has entered the competition.

“I am extremely proud of all of the members on this team,” said student project manager Michelle Leclere, a fourth-year mechanical engineering major from Roseville, California. “Everyone is excited to participate in this challenge because it provides a chance to work/network with NASA engineers and engage in an extremely technically challenging project. Many of the students on our team are also interested in pursuing a career in aerospace/space exploration.

“I am so happy that we have managed to connect with each other as engineers and as friends. I look forward to seeing all of the incredible things that this team will accomplish, and I feel honored to be leading them.”

They met regularly online via Zoom and in-person three times to examine last year’s Cal Poly prototype and put together their own concept.

“This is a highly competitive challenge, and I’m very proud of the team for putting together a successful proposal,” said Peter Schuster, the team’s faculty advisor and a Cal Poly mechanical engineering professor. “They’ve done a great job with their initial design work, and I’m looking forward to seeing how they progress their design forward over the next couple of months.”

NASA has confirmed water on the sunlit surface of the moon and ice at the poles in addition to extensive subsurface water-ice deposits at mid to high latitudes on Mars. In Dec. of 2022, the agency will send its Volatiles Investigating Polar Exploration Rover to the moon’s south pole, the same area where the first woman and next man will land later this decade under the Artemis program. VIPER, a mobile golf cart-size robot, will roam several miles looking for water ice to give NASA surface-level detail of where water is and how much may be available to use.

Being able to harvest and use that water is another feat. The innovation challenge for the university teams aims to advance critical technologies needed to make it possible. The teams will design and build hardware that could identify, map and drill through various subsurface layers, then extract water from a 600-pound ice block in a simulated off-world test bed.

“The ability to access water — wherever you are — is crucial to future human space exploration,” said NASA’s chief technologist Douglas Terrier. “Equally important is the willingness for NASA to continually seek fresh approaches. These bright undergraduate and graduate students will compete with each other, but also learn from each other, while we all strive to solve such a fundamental challenge.”

Leclere, who will graduate with bachelor’s and master’s degrees in the spring of 2022, said: “STYX & STONES is the official name of our prototype as well as what we like to call our team in the senior design class. Our prototype will include two main components: a masonry drill bit and an auger-heater probe hybrid tool.

“The masonry drill bit will create a hole in the Martian/lunar overburden (soil) using the force from a rotary hammer. The heater probe tool will then be moved to align with the hole and driven into the loosened overburden using the force of a small hand drill. The heater probe will melt ice using a cartridge heater and hot waterjet, then finally deliver water via a peristaltic pump and a two-stage filtration system.”

Last year’s Cal Poly team, STYX, was also a semifinalist before the competition was canceled due to the COVID-19 pandemic. However, that team completed an initial build/test of their system, and this year’s team was inspired by their work.

“Some of the technologies used in the original STYX proposal are planned to be continued in this year’s proposal,” she said. “However, our use of the name is primarily an homage to last year’s incredible team. They spent some time with us at the beginning of the project catching us up on their ideas and struggles that helped pave the way for our team’s success. We are very grateful for their support, and we wanted to reflect that in our team name.”

And the name refers to a comeback of sorts, she added, to the competition and from “the many struggles and tragedies faced throughout 2020” that the pandemic forced on everyone, Leclere added. 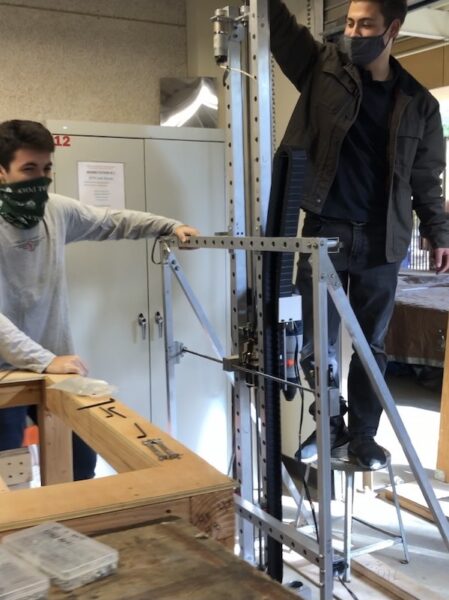 “We are very excited to get started,” she said. “We have some very complex parts that will be challenging to manufacture, but we have a team of rigorous problem-solvers who are all ready to learn new techniques to make it happen.”

During the competition, finalists will harvest as much water as possible from simulated slices of lunar and Martian surfaces. They will also participate in a poster session, presenting on the differences between operating their hardware on Earth versus the moon and Mars and explaining any adaptations their prototypes would need for each destination.

To learn more about the Moon to Mars Ice & Prospecting Challenge, visit: http://specialedition.rascal.nianet.org/.