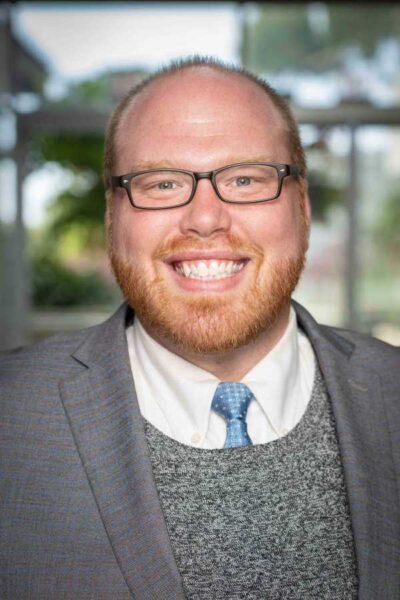 – Cal Poly has announced Zachary Smith, executive director of development for the Jacobs School of Engineering at the University of California San Diego, as its new vice president of university development and alumni engagement and CEO of the Cal Poly Foundation.

Smith, who will start at Cal Poly on Dec. 20, 2021, brings extensive higher education, nonprofit management, and fundraising experience to this role. In addition to his time at UC San Diego, he also has previous fundraising and leadership experience at California Western School of Law, Portland State University, as well as the Palomar Health Foundation.

“I’m pleased to welcome Zack to the Cal Poly family,” said Cal Poly President Jeffrey D. Armstrong. “This position plays a key role on our leadership team, as he will be overseeing and shepherding our fundraising and outreach efforts across the university. Private support is crucial to bolstering Cal Poly’s unique Learn by Doing educational model and allows for us to continue to offer the hands-on, top-of-class experiences that we’ve become nationally recognized for. Zack’s depth of experience and knowledge in this field will be instrumental in helping Cal Poly move forward. I’m thrilled that he will lead us in these efforts.”

“I’m grateful and excited for this opportunity to join the outstanding team of fundraising professionals at Cal Poly and to lead the university’s philanthropic efforts in support of the best possible hands-on educational experience for Cal Poly students today and into the future,” Smith said. “I can’t wait to get started.”

As executive director of development for the Jacobs School of Engineering at UC San Diego, Smith led the efforts of the external relations staff including major and principal gifts, donor relations, stewardship, and events. He worked directly with the dean of the school to provide strategic direction for a comprehensive major and principal gifts program. Smith joined the Jacobs School of Engineering after successfully serving five years in a similar role at the Rady School of Management at UC San Diego.

Prior to joining UC San Diego, Smith served as the senior director of development for the Palomar Health Foundation, where he oversaw a team of fundraising professionals dedicated to the advancement of Palomar Health, California’s largest public health care district. Prior to this position, Smith served as the director of major gifts within the Palomar Health Foundation, where he had the primary fundraising responsibility for the divisions of orthopedic medicine, cardiovascular care, men’s health, rehabilitative care, and neurosciences.

Smith also served as the associate director of major gifts and donor relations at California Western School of Law. There, he built the school’s first comprehensive major gifts program. Smith successfully created a breakthrough in fundraising, leading to the school’s most successful years of philanthropic support in the school’s history at that point.

While working at his alma mater, Portland State University, Smith started as a telefund caller and was quickly promoted to various posts in the Office of Annual Giving and eventually a major gifts role.

Smith cultivated his passion for higher education at Portland State University, where he earned a bachelor’s in criminology and criminal justice, while minoring in civic leadership. Smith was a member of the PSU Wrestling Team and competed in the PAC 10 Division during which time, he was honored as an All-Academic PAC 10 wrestler. He went on to earn his MBA at the Rady School of Management at UC San Diego. Smith and his spouse Kaylee live with their two dogs, Romeo and Roux.