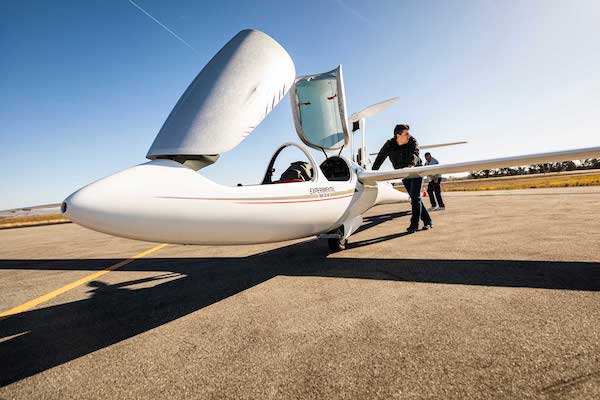 Paulo Iscold, an associate professor in the Aerospace Engineering Department, led the proposal for Cal Poly to work with the Air Force Research Lab on technologies for unmanned aerial research. Iscold has designed several planes, including this glider, which broke several records. Photo courtesy Cal Poly.

–The federal government has allocated $5 million to Cal Poly’s educational partnership with the Air Force Research Laboratory (AFLR), which will allow engineering students to conduct cutting-edge research on a modified general aviation airplane that will act as an unmanned aerial vehicle (UAV).

The funding represents half of $10 million appropriated to Cal Poly and California State Polytechnic University in Pomona through the Consolidated Appropriations Act (H.R. 133) to advance UAV technology. Last summer, in separate funding, the two campuses shared $5 million from the partnership to further research on mini satellite technology known as CubeSats.

Rep. Salud Carbajal, (D-Santa Barbara) whose district includes Cal Poly, secured the funding along with fellow Californians Rep. Grace Napolitano, (D-El Monte), and Rep. Norma J. Torres, (D-Pomona). The AFRL is interested in research that will further the priorities of the U.S. National Defense Strategy and the need for a new generation of unmanned and autonomous vehicles while creating a pipeline for future employees. The federal support will also increase the autonomy, safety, and security of unmanned aerial vehicles for widespread application.

“Military-educational partnerships like the one between the Air Force and Cal Poly enhance our national security capabilities and provide Cal Poly students with hands-on learning opportunities that set them up for successful STEM careers when they graduate,” said Carbajal.

“As a result of this support, our students will have a unique opportunity to work with the latest UAV technologies,” said Cal Poly President Jeffrey D. Armstrong. “This will enhance Cal Poly’s reputation for innovation while also providing students opportunities to perform relevant, real-world research with industry.”

UAVs, sometimes referred to as drones, are aircraft without pilots onboard. For the past several years, Cal Poly’s Aerospace Engineering Department has worked with several groups to provide UAV platforms for scientific missions, said David Marshall, who chairs the department.

“This includes helping survey the fire damage at Swanton Pacific Ranch this past fall,” he said. “We have been focusing on developing a high-quality UAV lab using industry-standard practices to get students familiar with proper design and operation of UAV activities.”

The importance of UAV technologies is growing in both the commercial and government sectors, Marshall said. By mounting new technologies onto these aircraft — including sensors, video cameras, and radar — much data can be obtained and processed to gain a better understanding of our surroundings. “Using these systems to access remote, dangerous or otherwise inaccessible locations allows for greater exploration with less risks.”

The new federal funding will allow Cal Poly to purchase an airplane to test the technologies. Paulo Iscold, an associate professor in the department and primary author of the proposal, said the plane will be like a laboratory in the sky.

“Very few universities around the world provide this type of opportunity,” said Iscold, a pilot who has built multiple record-breaking planes.

The new four-seat, turbo-charged plane, he said, will be modified to be an “optionally piloted aircraft.” A pilot will always be onboard, but the craft will be altered by students and faculty to fly without one, simulating a UAV. The funding will also support a flight data acquisition system, a line-of-sight communication system, and various prototyping equipment.

Iscold said he expects the industry to request students conduct UAV research on its behalf, providing key connections and hands-on industry experiences for students. While it is part of an Education Partnership Agreement, the Cal Poly proposal allows for much autonomy and flexibility, Iscold said. In turn, the AFRL can benefit from what is learned.

One possibility for research is to pair UAV research with other technology, including CubeSats.

“Communication between multiple assets is becoming a more important technology as scientists and engineers look at coordinating activities between various assets, such as UAVs, land-based vehicles and piloted aircraft, to accomplish more sophisticated tasks,” said Marshall, who worked on the proposal with Iscold and Aerospace Engineering Professor Aaron Drake.

Cal Poly’s Aerospace Engineering Department, already one of the best in the nation, will continue to enhance its reputation with this initiative, said Amy S. Fleischer, dean of the college.

“We’re excited that our elected officials and the Air Force Research Lab recognize and acknowledge the incredible things our students and faculty do,” she said. “While this funding will benefit Cal Poly, the work that is done with the money will ultimately advance society.”

The Air Force Research Laboratory, based at Wright-Patterson Air Force Base in Ohio, was created in October 1997. The laboratory was formed through the consolidation of four former Air Force laboratories and the Air Force Office of Scientific Research. AFRL investment includes basic research, applied research and advanced technology development in air, space and cyber mission areas.