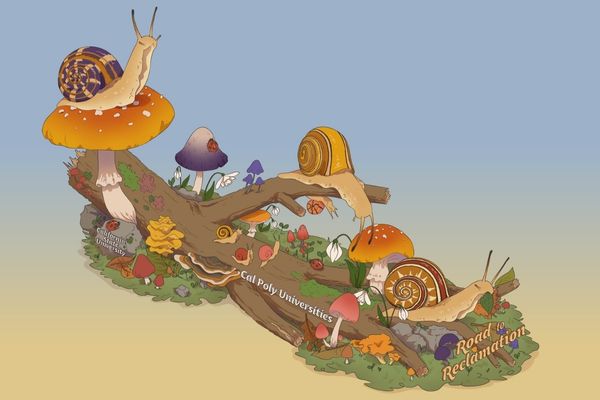 – Cal Poly students have imagined a forest world of gigantic snails, mushrooms and colorful fungi for their 74th entry in the upcoming Pasadena Rose Parade.

The 2023 Tournament of Roses theme is “Turning the Corner,” which symbolizes the positive change and unlimited potential that each new year can bring. The Cal Poly float, “Road to Reclamation,” will demonstrate that through these vibrant revitalizers a new start can come from unlikely places — by transforming a dead tree branch into a catalyst for new life.

The 23-foot-tall float features an enormous purple snail scanning paradegoers from its perch atop a 16-foot red-capped mushroom at the end of the float. Another mega-snail watches baby snails playing chase, while a third snail, its 6-foot-tall, coiled shell in shades of brown and gold, scouts the route at the front of the float.

The entry’s forest floor will be festooned with a rainbow of oversize fungi, moss, and lichen converting the fallen branch into nutrients for their community, while ladybugs flap wings in preparation to take off.

“A nurse log serves as a vital part of a forest ecosystem,” said Annie Doody, Cal Poly Rose Float president and one of the team’s longest-serving volunteers (predating her college enrollment in San Luis Obispo to when the Glendale resident was just eight years old). “It serves as the basis of a new environment as a community comes together to create something new.

“Change is caused by many things: it can be the turnover from one year to the next, or the graduation from a university into the workforce. Whatever the case, ‘Turning the Corner’ reminds us to face these changes with open minds and excitement for what comes next. Our float represents rebirth and second chances, as well as the magic and wonder that come with the endless possibilities of a new start. After all, who knows what’s around the corner?”

Doody, a marine science major with a minor in theater, joined Cal Poly Rose Float in the fall of 2019 as a freshman and received “Rookie of the Year” in construction award. She served as the electronics assistant the following year, in which the January 2021 parade was canceled due to COVID-19. She was selected electronics lead and later animations operator for 2022’s “Stargrazers,” overseeing a team who programmed the movements of the animated elements on the float.

“Stargrazers,” which brought to life a scene from the classic Mother Goose rhyme “Hey Diddle Diddle,” received the Animation Award at the 133rd Rose Parade last Jan. 1. Doody rode aboard and operated all of the float animations.

“We’re taking a small, often overlooked, part of nature and scaling it up to the size of a 55-foot-long Rose Parade float,” said Ryan Ward, a mechanical engineering senior who is president of the Pomona Rose Float team.

Students at both universities have been working on the float design since February and are now turning their plans into reality. Design team members are busy welding pencil-steel frames for the 6-foot mollusks and other large elements and plant life.

The construction crews are hard at work building the drive, electric and hydraulic systems as well as the pod’s structural base to support the design elements.

And the decoration teams have finalized the color palette and are searching for the perfect material to bring vibrancy, texture and pop to each part of the float. These include using over 3,500 chrysanthemums on the snail shells alone — and the team is currently growing sheets of clover to test for the moss and forest floor aspects of the float.

To jointly build a float at two universities separated by 230 miles, the float’s chassis base is in two pieces. Students in Pomona are working on the front half, while the Cal Poly crews focus on the back.

Close communication allows the teams to coordinate their work. In mid-October, the Cal Poly portion and parts will be trucked to the Pomona campus, where the halves will be joined and the teams will begin layering and attaching the design elements in the sprint to the finish.

The float moves to Pasadena in mid-December. Between Christmas and New Year’s Day, hundreds of students and volunteers work almost around the clock in the shadow of the Rose Bowl to decorate the float with flowers and other natural materials.

“The Road to Reclamation” will cruise down Colorado Boulevard in Pasadena as part of the 134th Rose Parade on Monday, Jan. 2. (The parade has a “Never on Sunday” tradition when New Year’s Day falls on a Sunday.)

In the fall of 1948, students from San Luis Obispo and Pomona first came together to produce a float for the 1949 parade. Since then, the two universities’ entries have earned 61 awards over the years.