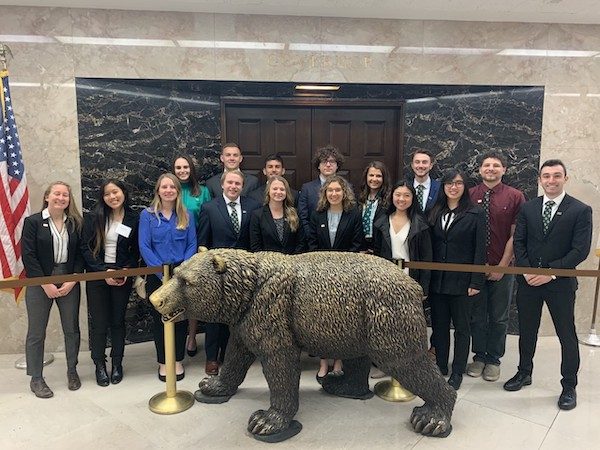 Nathaniel Morgan is second from right by the California grizzly bear statue placed outside the Governor’s office in the California Capitol State Building.

–Sixteen Cal Poly students were recognized for their awards and other accomplishments by state lawmakers on the floors of the state Assembly and Senate in Sacramento on Monday, March 2. One of the students Nathaniel Morgan, is from Atascadero.

“Our students are doers who take pride in the creative process — building a vehicle that gets people across the country faster; creating a light-weight concrete canoe that slices through the water more efficiently; constructing a bicycle capable of setting speed records; or helping to explore the cosmos by finding — and harvesting — extraterrestrial sources of ice,” said university President Jeffrey D. Armstrong, who is accompanying the group to Sacramento.

“They are our ambassadors of Learn by Doing. They represent like-minded counterparts in all six of our colleges. Their successes, in and out of the classroom, for which they will be recognized by our lawmakers in Sacramento show that these young people are leaders ready to take on real world challenges and succeed.”

The group will be introduced to the Senate by Majority Leader Bill Monning, D-Carmel, and to the Assembly by Assemblywoman Megan Dahle, R-Bieber. Monning represents San Luis Obispo County. Dahle has a son who attends Cal Poly.

Ceremonies were held in each chamber Monday afternoon.

The majority of the students call California home — from the Bay Area to San Diego — including Nathaniel Morgan from the Central Coast. One is from outside the Golden State —Ohio.

Morgan is a biology senior who overcame childhood homelessness and dyslexia to pursue a career in science received a 2019 California State University Trustees’ Award for Outstanding Achievement.

Each has distinguished himself or herself, as an individual or on a team that has received a national industry award or in other high-profile events.

These include the Tournament of Roses Parade, with its worldwide TV audience of 65 million; Mustang Media, the campus newspaper, radio, TV and online outreach that earned nearly 50 state and national honors; the concrete canoe team that was runner-up in the national championship; a team of engineering students who are helping NASA look for ways to drill for water on Mars and the moon; and an interdisciplinary team that was invited to SpaceX’s competition to build a Hyperloop pod for faster personal and freight travel.