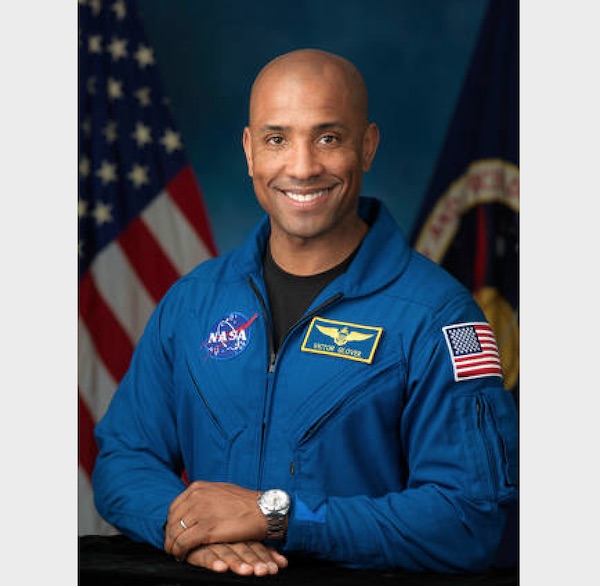 –More than 1,000 students are eligible to graduate in ceremonies at Cal Poly’s 38th annual fall commencement, a virtual event, on Saturday, Dec. 5. There will be six online academic college ceremonies, all set for 10 a.m.

The ceremony will feature a surprise for graduates: keynote remarks delivered by NASA astronaut and Cal Poly alumnus Victor Glover, whose comments were recorded onboard the International Space Station (ISS) orbiting 250 miles above Earth.

Glover served as pilot and second-in-command on the Crew-1 SpaceX Crew Dragon, named Resilience, which launched Nov. 15 and docked the next day with the ISS, where he is currently serving. This NASA mission is the first post-certification mission of SpaceX’s Crew Dragon spacecraft — the second crewed flight for that vehicle — and a long-duration mission aboard the space station. Glover also is serving as flight engineer on the station for Expedition 64.

Glover is the first African-American to begin a full six-month stint on the orbiting lab and the 15th Black NASA astronaut to reach space.

Glover (B.S., General Engineering, 1999) was selected in 2013 from the third-largest number of applications NASA had ever received — more than 6,100. His astronaut candidate training class, which graduated in 2015, received a wide array of technical training at space centers around the globe in preparation for missions to low-Earth orbit, an asteroid, and Mars.

An engineering graduate, the 44-year-old naval commander also credits his role as a member of the Cal Poly wrestling team during the 1994-95 season with helping prepare him for work as an astronaut.

“Wrestling was one of the most indelible influences in my life,” he said. “Someone asks me about being in the pool at the Neutral Buoyancy Laboratory and doing the EVA (Extra Vehicular Activity) training. I compare it to wrestling and how you have to be able to think in 3-D and to think moves ahead if you want to go from good to great.

“And I think that same applies in the NBL pool. You can kind of back up and look at your workspace, and you can rotate yourself upside down and then attack the problem or lay flat on your back. Wrestling had just as much of an impact on me as the things I was learning in the lab or in engineering.”

From Pomona, California, and Prosper, Texas, Glover is an F/A-18 pilot and graduate of the U.S. Air Force Test Pilot School. He also holds degrees from Air University and Naval Postgraduate School. He earned his wings as a Naval Aviator in 2001 and served a two-year deployment in support of Operation Iraqi Freedom, flying 24 combat missions.

The fall commencement ceremonies will honor nearly 900 undergraduate students and about 116 master’s students.

For more information about the virtual fall commencement and to view the ceremonies, visit https://commencement.calpoly.edu/

For more information on Victor Glover, visit https://magazine.calpoly.edu/fall-2020/the-astronaut/ and his NASA bio at https://www.nasa.gov/astronauts/biographies/victor-j-glover/biography.