Paso Robles News|Wednesday, May 25, 2022
You are here: Home » Politics » Candidates enter bid for groundwater board

Candidates enter bid for groundwater board

Five of the nine seats will be contested 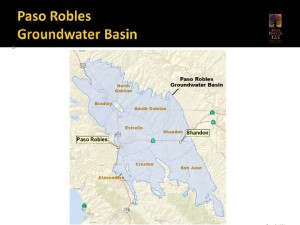 A map of the Paso Robles Groundwater Basin. About 60-percent of the basin is in San Luis Obispo County and 40-percent in Monterey County.

–Earlier this month was the deadline for candidates to enter the running for the Paso Robles Groundwater District Board.

The board, formed due to a state mandate that requires local jurisdictions to manage water resources, will manage the district, but only if residents and property owners in the Paso Robles groundwater basin vote to form and fund the district. That vote will come on March 8 of 2016. Only five of the nine seats will be contested come election time.

The board would be made up of both small, medium and large property owners and registered voters.

According to reports, the following are the candidates in each category: