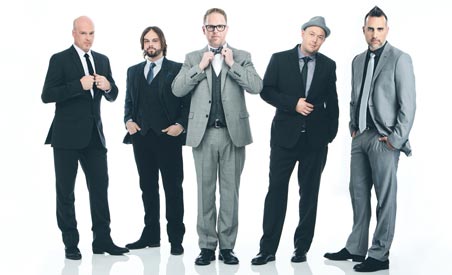 Cantinas Foundation, who brought the sold-out Cantinas Music Festival to the Paso Robles Events Center for two consecutive summers, has rebranded their annual faith-based music event in Paso Robles to “Cantinas Night of Faith” and will now be the official sponsor of MercyMe’s performance at the Mid-State Fair on July 23, 2014.

In congruence with the MercyMe concert, The Cantinas Foundation is hosting the 3rd Annual Cantinas Christian Song Search. Musicians are encouraged to submit a video recording of an original faith-based song for a chance to win an all-expense paid trip to the California Mid-State Fair and to perform the opening act of both performances for MercyMe. The contest winner will also be awarded a $2000 cash prize, the opportunity to record their song with a leading Christian music producer, and then release that single with the Dream Label Group.

MercyMe, the number one Christian rock group in the US with over seven million albums sold, will take to the Frontier Stage on Wednesday, July 23 with two performances, at 6:30pm and 8:30pm. The concert is free with paid admission to the Fair.

“Since their debut in 2001, lead singer Bart Millard, keyboardist James Bryson, percussionist Robby Shaffer, bassist Nathan Cochran and guitarists Michael Scheuchzer and Barry Graul have been GRAMMY®-nominated and won an American Music Award as well as multiple Dove Awards. This band has struck the hearts and souls of music fans around the globe and it is my honor and a pleasure to share their love of God with Christian music fans and families attending the Mid State Fair this year,” says Wendy Hughes, Founder and Executive Director of Cantinas Foundation.

Christian music fans can also visit the Cantinas Foundation booth throughout the duration of the Mid-State Fair and watch the newly formed Cantinas Dance Project perform on July 21, 2014 at 5:30pm on the Headliner Stage. The 2014 California Mid-State Fair runs from July 16 through July 27.

For those who missed the Cantinas Music Festival events in 2012 and 2013, a 1-hour special program about the festival will air on JUCE TV (an American Christian based broadcast television network) on Friday June 6 at 5:30pm (PT)/8:30pm (ET) and on Saturday June 7 at 12pm (PT)/3pm (ET). Viewers can also download the free JUCETV app from ITunes or Android store to watch JUCETV live streaming on a smartphone or tablet.

The Cantinas Foundation is a non-profit 501(C) (3) entity, founded by California natives and philanthropists B. Wayne Hughes, Jr. and Wendy Hughes, to transform modern day culture through opportunities where faith and family can be magnified through the Arts.