Car broken into near Firestone Walker on Saturday

–Loren Reno’s vehicle was broken into on the 1400 block of Ramada Drive by Firestone Walker Brewery Saturday between 10 a.m. and 5 p.m., according to a report she filed with the Paso Robles Police Department Saturday evening. Paso Robles Police Public Information Officer Lt. Ty Lewis said the window was smashed and her purse was stolen from the vehicle while she was working in the Taproom.

That same night she posted a security video from a local store to Facebook where the man suspected of stealing her purse. To view the video, click here. 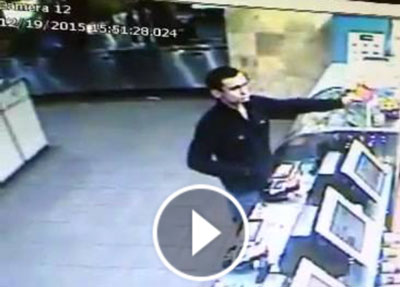 A potential suspect was seen in this video posted by Loren Reno.

Reno said that her cards were used to purchase nearly $1,000 worth of gift cards in the area before she was able to notify the companies. She said the suspects –two different people used her card at the same place– used her cards at six stores in the area. The last transaction on her cards was at Office Depot, of which there is no longer one in the North County.

She said that the officer investigating the case ended his week on Saturday and will not be back to work until Wednesday, so Reno has been looking into the case herself, looking into where her cards were used and going into the stores and talking to the people who were there and obtaining security video.

“I don’t have any solid leads,” Reno said, but she said that from she’s learned, she believes it’s more of an operation of people coming from out of the area –she thinks they are from Fresno.

Lewis said that all types of theft increase around the holidays as more people have valuables in their cars, especially in plain sight.

“We regularly encourage people to make sure [their] doors are locked,” Lewis said. “If you do have valuables, secure them in the trunk. People will look for anything they can.” However, he said that valuables should be removed completely from the vehicle when possible.

He also encourages people to park in well-lit areas, though he acknowledged it wouldn’t have made a difference in Reno’s case since it occurred during daylight hours. So far for the month of December, there have been 12 burglaries –he said a burglary is when something is broken into, it does not include thefts where the car is left unlocked– three of those since Dec. 13. He said that there have been 29 kinds of theft in December.

He said that it is not surprising that the number of thefts increase during the holidays with people having more valuables left in their cars.

“It really benefits the community if [people] keep things secure and out of sight,” Lewis said, adding that it’s better to take purses and other valuables into work or home rather than to leave it in the car.