Car chase out of Monterey County ends in Paso Robles 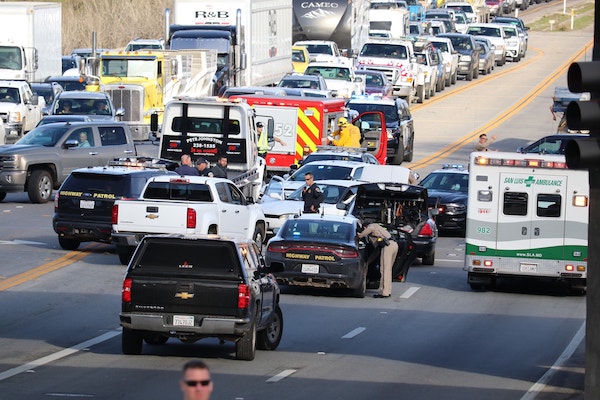 –At approximately 1:58 p.m. Friday, local California Highway Patrol Dispatch was advised by Monterey CHP Dispatch Center of a pursuit traveling southbound on US-101 from Monterey County entering San Luis Obispo County. A Coastal Division CHP K9 Unit was trying to overtake the suspect vehicle, a white Toyota Camry, that was initially observed exceeding the maximum speed limit. King City CHP attempted to initiate a traffic stop on the suspect vehicle for the observed violation, however instead of yielding, the suspect vehicle fled southbound on US-10I until it entered San Luis Obispo County.

Templeton CHP Units deployed a spike strip to disable the fleeing vehicle, but the vehicle avoided the spike strip and continued southbound. CHP Units continued to pursue the suspect when they exited 17th Street into the City of Paso Robles. The suspect vehicle drove northbound on Riverside Drive and then eastbound on 24th Street towards US-101. As the vehicle slowed near the Highway-46 and 101 Interchange, a CHP Unit utilized the PIT (Pursuit Immobilization Technique), maneuver and disabled the suspect vehicle subsequently ending the pursuit. CHP Officers then took the driver and passenger into custody.