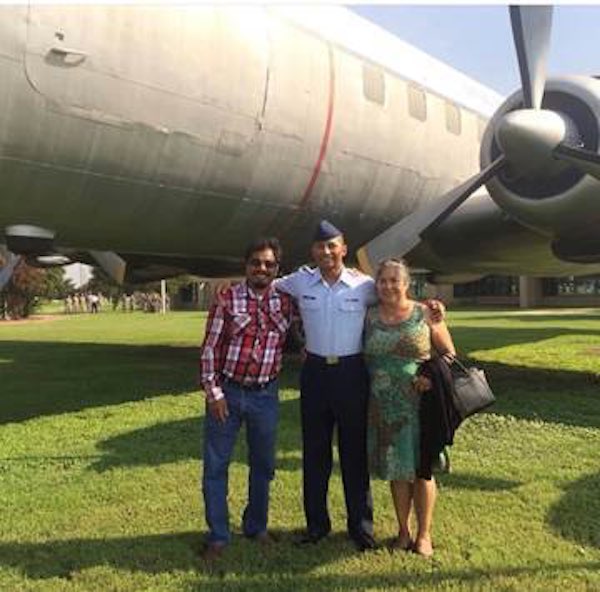 Mrs. Juana Flores and her husband with their son, Sgt. Caesar Flores of the United States Air Force.

–This week, Rep. Salud Carbajal (D-Santa Barbara) announced that the Department of Homeland Security has granted Central Coast community member Juana Flores humanitarian parole. After being deported to Mexico two years ago, she will now be reunited with her family.

“After two long years apart, the Flores family will finally be reunited,” said Rep. Carbajal. “Juana’s deportation under the Trump Administration left a hole in our Central Coast community that I’m glad will now be filled. I thank the Biden administration for granting her humanitarian parole, which means she can return to her community and be present in the lives of her children and grandchildren. However, I will continue fighting to secure a permanent stay for Juana and reunite other families that were cruelly separated under the Trump administration. The families of our service members deserve our respect and admiration, not deportation, which is why I will continue working to pass the Protect Patriot Parents Act and advance legislation that fixes our broken immigration system.”

“When Mrs. Flores was deported over two years ago, an American family’s foundation was pulled down,” said Juana Flores’ legal counsel, Kraig Rice and Hon. Frank Ochoa (Ret.) in a joint statement. “An active-duty United States service member’s mother was disabled from her role as part of our military support system. And our local California Central Coast was deprived of a productive and impactful member of the community. The Department of Homeland Security has righted a grievous wrong and, through this decision, a family is reunited. The family is extremely grateful to Congressman Salud Carbajal, whose steadfast and impactful support was critical to this effort, and to the multitude of local elected officials and members of the community at large who played a part in this effort.”

“We are deeply grateful for each and every single individual that helped us through these two difficult years,” said Juana Flores’ daughter, Cristina Flores. “We could not have done it without their dedication, support, and devoted generosity during such a hard time in our family. Team Juana and Carbajal’s office worked tirelessly to bring my mom home. We are looking forward to our Sunday family meals that so many families take for granted, introducing my mom to her two new grandchildren, and my mom’s birthday on June 9th. Thank you to everyone once again for lending a helping hand and standing by our side in this long journey.”

Juana Flores was deported by the Trump Administration in April of 2019 after living in the United States for over 30 years and building a life in Santa Barbara County with her husband, 10 children, and 18 grandchildren.

One of her children, Sgt. Caesar Flores, is active duty in the United States Air Force. Sgt. Caesar Flores has been vocal about the hardships the family has faced since the deportation of their mother, especially as Sgt. Flores celebrated the birth of his first child and prepared to deploy overseas.

In January, the Flores family joined Rep. Carbajal for a press conference to announce the reintroduction of H.R. 454, the Protect Patriot Parents Act, which would ensure that the parents of active-duty military personnel are not deported, but granted a pathway to legal status.

In March of this year, Congressman Carbajal wrote a letter to President Biden’s Department of Homeland Security (DHS) Secretary Alejandro Mayorkas asking him to grant the Flores family’s request for humanitarian parole. Humanitarian parole allows individuals who are otherwise inadmissible into the United States the ability to enter the country for a temporary period of time based on humanitarian reasons or a significant public benefit.

Flores’ humanitarian parole will last one year. It begins this Friday, June 4, at which point she will return to the United States. Rep. Carbajal will continue working to advance the Protect Patriot Parents Act in order to remove barriers that prevent parents of service members, like Mrs. Flores, from applying for Legal Permanent Residency.