Paso Robles News|Saturday, January 28, 2023
You are here: Home » Wine » Cass Winery named Winery of the Year for the third time

Cass Winery named Winery of the Year for the third time 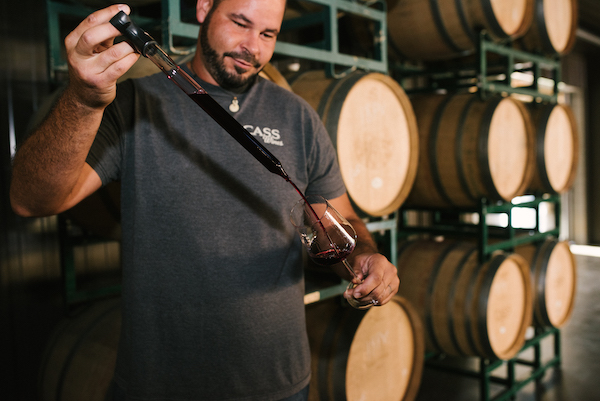 This is the third Winery of the Year award earned under the creativity of Winemaker Sterling Kragten, aged 34. Photo credit Yvonne Goll Photography, courtesy Cass Winery.

As head winemaker, Sterling led Cass to win this honor in 2015 and 2018, making it the first time a winery has won the award three times.

In reference to the Rhône and Bordeaux varietals that Sterling plays with daily, he is excited to see less typical vines grab some notoriety.

“I love the fact that the more obscure varietals are garnering so much attention!” said Cass, “Two years ago the Cass 2016 Mourvedre was best overall red. Now, the MR BLANC, being a Marsanne Roussanne based blend, wins best overall white wine. These are two varietals that most people have probably never tried.”

This year’s competition included 503 wines from 86 wineries and ten counties stretching from Alameda to Ventura. After the socially-distanced, blind-tasting event held Oct. 12-14, Cass was awarded the coveted title of Winery of the Year. With three Best of Class, four Double Golds, seven Golds, and seven Silvers, Cass Winery’s selections produced the point average to win this honor. The honors continued with their Mr. Blanc taking the Best White Wine award, as well.

“I am very humbled that Cass wines are so well received. Winning Central Coast Winery of the Year for a third time in five years is a testament to the dedication of quality that the whole team at Cass has,” says Sterling. “This, of course, starts in the vineyard with the team paying attention to what the individual blocks and varietals need, to putting in extra effort toward being a Certified California Sustainable Vineyard. This dedication carries over in the winery to showcase Cass Vineyards through small lot fermentation and hand selection of every single barrel, to which wine it will be blended to.”

Despite unabashedly claiming to be the UN-millennial, Sterling Kragten has done a remarkable job of continuing to cement his generation’s role in the field of winemaking. A role that is continuing to grow in number and esteem, as the industry experiences a boom in remarkable millennial winemakers and sommeliers.

In regards to taking on a pivotal role of leadership, Sterling says, ”It was very nerve-racking to be Head Winemaker at the age of 28. This was the opportunity that I had been working towards one way or another for the past 10 years and I did not want to drop the ball. I put in all the effort I had to show not only that I was capable, but that I could succeed. So, being awarded Winery of the Year three times in five years is very gratifying not only because people are really enjoying Cass wines, but that the hard work is paying off.”

Owner, Steve Cass, rests confidently in his decision to give Sterling a chance to shine at such a green age: “It has been my experience that the best winemakers have four key qualities…a strong academic background (in something like enology, food science or chemistry), good mentoring, a keen palate, and, of course, a strong and organized work ethic. Sterling has all of this and more. In addition to being a great winemaker, he has a funny and pleasant personality. Ask him about the mayonnaise filled donuts on April Fools Day.”

Cass Winery is a family-owned vineyard in the heart of the Geneseo Sub AVA of east Paso Robles, CA. With 145 acres of Rhône and Bordeaux varietal vines planted, the winemaking tradition at Cass has been vineyard-forward and 100% estate-grown centric since its birth.

To discover more of Cass Winery, go to https://casswines.com