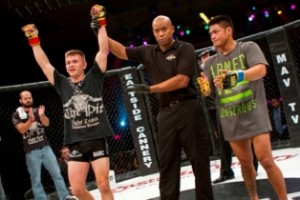 Pit North Owner and Head Trainer, Castle Williams, won his mixed martial arts fight by guillotine submission 2 minutes 22 seconds into the very first round on Dec. 7. The bout took place in Las Vegas at King of the Cage, Future Legends 19 and brings his amateur MMA record to 6-0.

Williams trains under the legendary John Hackleman at Pit Headquarters in Arroyo Grande and is the youngest owner, at only 19 years of age, of a Pit Gym.

Less than a week after this last fight, Williams was offered a title shot at the 145lb belt – this championship bout will take place Feb. 8 at the Eastside Cannery Casino in Las Vegas. Plan a trip to Las Vegas to come out and support this Central Coast phenom or follow along with Williams on his training camp following up to the fight: on Twitter @castlewilliams or Facebook, www.facebook.com/pitnorth.mma