Solar installation adds to the winery’s, ‘quest for sustainability’ 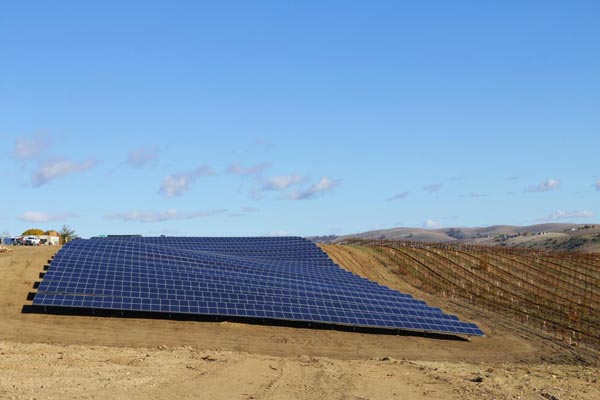 The 625-kilowatt installation, which covers nearly three acres, will have an annual production of over one million kilowatt hours.

–Castoro Cellars has completed an installation of a massive new solar project that will allow the winery to run 100-percent on solar power. The 625-kilowatt installation, which covers nearly three acres, will have an annual production of over one million kilowatt hours and eliminate an estimated $20,000 per month electricity bill. This marks the fifth solar installation in the last ten years by Castoro.

The solar project began construction in October in Castoro’s organically grown Stone’s Throw Vineyard, adjacent to the winery production facility in east Paso Robles. The system was designed to power the entire winery with solar generated electricity, a longtime goal of owners Niels and Bimmer Udsen. They say they expect the system to pay for itself by the fifth year, and will save nearly $240,000 per year for at least the next 25 years.

“Bimmer and I have always felt the sun is a gift that we should utilize, “ says Niels. “When the solar industry was starting they needed supporters to build the industry and we were eager to help. The paybacks were longer, but that really wasn’t the motivation, clean power from sun was and still is the reason for this project. Paso Robles is the perfect place to utilize solar.”

Castoro Cellars was an early adopter of solar energy, investing in their first solar project in 2006 at their tasting room on Hwy 46 West. The energy produced from the rooftop array powers about 70-percent of the tasting room and the summer concert series. In 2012, they added a second solar installation in their Dos Vinas Vineyard in San Miguel, a 61.4-kilowatt array, which powers agriculture wells and an on-site home. With solar already installed at the tasting room and vineyard, the new winery array brings solar energy across the entire company operations. All of the solar projects were planned and installed by REC Solar.

“REC Solar applauds the Udsens on their dedication to utilizing the sun to complete their sustainable mission,” said Ryan Park, director of business development at REC Solar.

The Udsens are the largest grower of organic grapes in Paso Robles with over 400 acres certified organic by California Certified Organic Farmers. The winery is a certified organic facility and all additional vineyards they own and source from – over 1,000 acres – are SIP certified by the Central Coast Vineyard Team.

“Solar is something we believe to be necessary for a sustainable future,” Luke Udsen, director of California sales and marketing and social media said. “Solar energy is clean, requires no fossil fuels, creates no carbon emissions, and requires very little maintenance or upkeep. This system will allow us to grow roughly a thousand acres of grapes with the sun and then turn it into wine using the sun as the power source.“

The electricity generated over 25 years by the new solar system at Castoro is equivalent to:

This year they will again host the Earth Day Food and Wine Festival on April 23, their third year hosting the event that celebrates the passion and people behind the sustainable food movement.