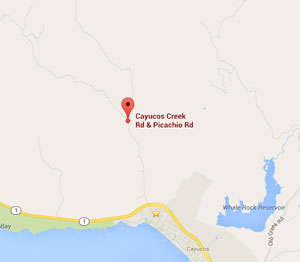 The Coroner’s Unit of the San Luis Obispo County Sheriff’s Office has identified the victim involved in a fatal car accident which occurred on 3-14-14 in Cayucos. The driver of the car has been identified as 21-year-old Sadee Rae Jurgensen of Cayucos. Next of kin have been notified. An autopsy is planned for this week. The results of that autopsy will be pending toxicology results which are expected to take six to eight weeks.

A Cayucos woman died from injuries she suffered in a car accident late Friday night. The Coroner’s Unit of the San Luis Obispo County Sheriff’s Office identified Tuesday the victim involved in the fatal car accident which occurred on March 14 in Cayucos. The driver of the car was 21-year-old Sadee Rae Jurgensen of Cayucos, CA.

The California Highway Patrol says Jurgensen was driving herself and a male passenger in a 1999 Isuzu Amigo at about 11:35 p.m.

The vehicle was traveling eastbound on Picachio Road, east of Cayucos Creek Road. Jurgensen apparently lost control of the vehicle and drove down an embankment, hitting rocks and coming to rest in a creek bed, according to a CHP report. The driver and passenger were trapped inside the car. Firefighters rescued both using the Jaws of Life. Jurgensen died at the scene, CHP report

The passenger, a 25-year-old from Paso Robles, was taken to a nearby hospital to be treated for minor injuries.