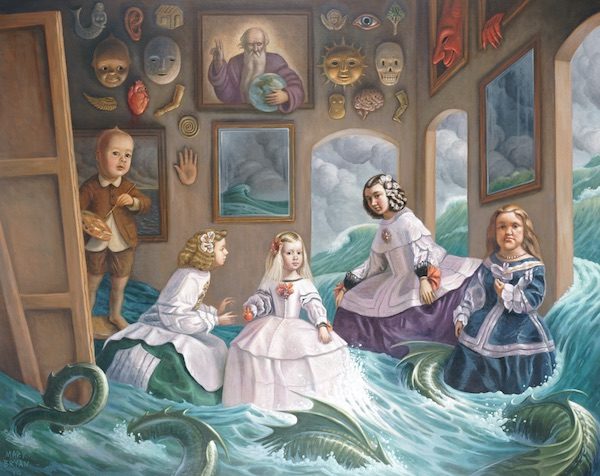 –The San Luis Obispo Museum of Art has announced that it will be hosting the exhibition “Fake News” by Central Coast artist Mark Bryan. This exhibition features Bryan’s well-known political satire and pop-surrealism paintings. The exhibition will fun from Feb. 28 to April 26.

Raised during the turmoil of the 1950s and 60s, Bryan says he is notably influenced by the pop-culture and political dissent that defined those decades. The influences of “cheesy Sci-Fi and horror movies, comic books, and Salvador Dalí are informed by his coming-of-age experiences during the violence of the Vietnam War, the Red Scare, and the Civil Rights Movement.”

Bryan combines art historical references with contemporary topics, and adds in a healthy dose of humor. One such painting is the reinterpretation of Arnold Bröklin’s Isle of the Dead. In Bryan’s version, the desolate island is filled with fun-loving skeletons diving off rocks into the water, paddle-boarding, and tight roping. Another such painting is Las Meninas, a reinterpretation Diego Velázquez’s famous painting in the Museo Nacional del Prado in Madrid, Spain. Bryan’s version replaces Velázquez’s cleverly placed self-portrait with his own “big baby” self-portrait, which is featured in numerous other paintings. Instead of the studio floor, the Infanta and ladies-in-waiting are engulfed in a stormy sea, in which a menacing serpent-like creature cuts through the waves. The painting has been updated to a surrealistic scene, but one that still turns the attention back onto the viewer as the subject matter, something many of Bryan’s paintings do. Viewers are often confronted with familiar imagery and behaviors in his artworks. From tabloid news stories, to modern technology, to the climate crisis, Bryan’s work is truly a reflection of the times.

Bryan frequently revisits stories and motifs, creating connections and repetition between all his paintings. His work has the unique ability to make viewers gasp, think, and chuckle. Originally noticed for his critical paintings of the Bush Administration, Fake News features newer paintings of Bryan’s that turn the lens on the behavior of Donald Trump. This series of paintings is featured alongside his works of pop-surrealism and religious satire.

Although politically charged, they are undoubtedly outstanding works of art, regardless of one’s political affiliation. Visitors are welcome to explore these paintings, see what they can discover, and perhaps be challenged along the way.

SLOMA will be hosting an opening reception for the exhibition on March 6 from 6 to 9 p.m., in conjunction with Art After Dark. This event is free and light refreshments will be served. Visitors who also wish to hear Bryan speak in more detail about his influences and technique are invited to attend an ARTalk on March 5 at 12 p.m.

The San Luis Obispo Museum of Art is located at 1010 Broad Street, on the west end of Mission Plaza. For more info, visit SLOMA.org.