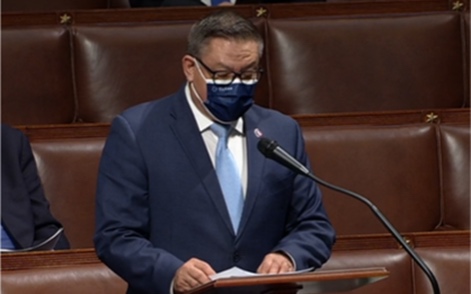 –Last week, Rep. Salud Carbajal’s Central Coast Heritage Protection Act (H.R. 973) passed the House of Representatives as part of the Protecting America’s Wilderness and Public Lands Act, a package aimed at preserving America’s public lands. The package passed on a bipartisan basis, with a vote of 227-200. Carbajal represents Paso Robles and all of San Luis Obispo County in the House.

The Central Coast Heritage Protection Act designates nearly 250,000 acres of public land in the Los Padres National Forest and Carrizo Plain National Monument as wilderness, the highest form of federal protection available, which prohibits any new development on these public lands. The bill also establishes a 400-mile long Condor National Recreation trail, stretching from Los Angeles to Monterey County. The area this bill protects is home to a wide array of plant and animal life and the bill will help to sustain the ecological future of 468 species of wildlife and more than 1,200 plant species.

“One of the best things about living on the Central Coast is our access to beautiful public lands, like the Carrizo Plain National Monument and Los Padres National Forest,” said Rep. Carbajal. “The Central Coast Heritage Protection Act will help preserve these public lands for future generations to enjoy and continue to bolster our local economy. I am thrilled the Central Coast Heritage Protection Act has passed the House once again and I urge my Senate colleagues to move quickly and send this crucial bill to President Biden to sign into law.”

On Thursday, Rep. Carbajal spoke on the House floor in support of the bill. A transcript is available here.

The Central Coast Heritage Protection Act passed the House last year as part of the Protecting America’s Wilderness Act, but stalled in the Senate. Given President Biden’s support for the bill and the Democratic majority in the Senate, Rep. Carbajal is hopeful the bill will receive due consideration in the Senate this Congress.

A fact sheet on the Protecting America’s Wilderness and Public Lands Act can be found here.