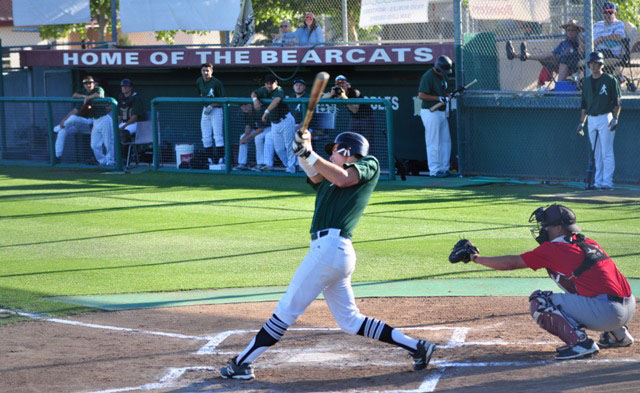 Andy Garretson, player-manager with the Central Coast Swingers, connects for a base hit on Friday night at Barnhart Field. The Swingers won their home series against the visiting California Wahoos. Photo by Meagan Friberg

After a 3-11 loss to the visiting California Wahoos on Friday night, the Central Coast Swingers came back strong on Saturday to earn 10-9 and 7-4 wins before their hometown crowd at Paso Robles High School’s Barnhart Field to secure the series win.

Andy Garretson and Alex Kothiemer, player-managers for the Swingers, said the team hit the ball well in the first game, but struggled a bit with pitching and defense. 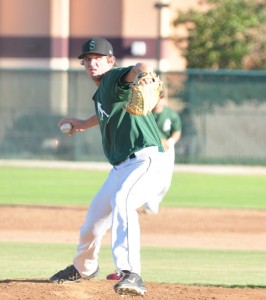 Evan Peterson pitches for the Central Coast Swingers during the team’s home series win over the California Wahoos. Photo by Meagan Friberg

“Saturday was much better pitching and it resulted in getting some good team wins,” said Garretson.

The Swingers are set to hit the road Tuesday to take on the California Club at DeAnza College in Cupertino at 4 p.m.

This weekend, they will travel to Santa Maria to face the Wahoos again in a two-game series at Elks Field, with game time set for 6 p.m. on Saturday followed by the second game on Sunday (game time to be determined).

As an independent collegiate summer baseball team, the Central Coast Swingers depend on sponsorships and contributions from the local community. To contribute funds or learn more about sponsorship opportunities, email andygarretson33@gmail.