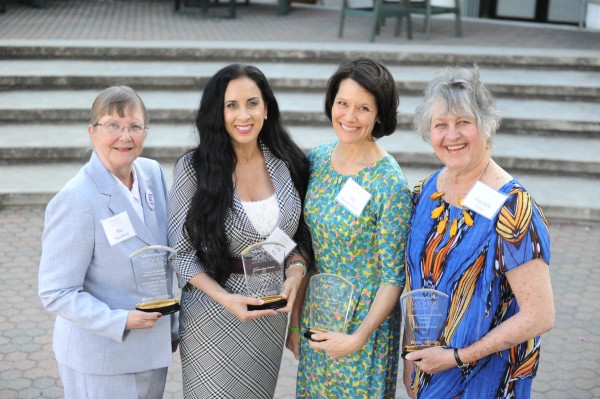 The four recipients of the 2015 Women of Distinction awards, left to right: Elizabeth “Biz” Steinberg, Lisa Ray, Jill Bolster-White and Grenda Ernst. The women were recognized on Thursday, March 19, during a ceremony at Cuesta College.

Cuesta College and the Community Foundation San Luis Obispo County’s Women’s Legacy Fund announced the recipients of the 38th Women of Distinction awards. The awards honor four women from throughout the Central Coast for their professional and civic contributions. The honorees were nominated by their peers and chosen by a selection committee. The award ceremony to honor the recipients was held Thursday, March 19, at Cuesta College.

The ceremony and awards returned in 2014 with their original purpose – to celebrate Women’s History Month (March) and recognize the contribution that women have made in the areas of volunteering in the community, their profession and in philanthropy.

Community and Public Service Award, Volunteer: Grenda Ernst
Grenda Ernst maintained a distinguished career at the Atascadero State Hospital from 1976-2003. She held a number of progressively responsible positions and retired as clinical administrator in 2003. During her career, Ernst was active in the Forensic Mental Health Association and the California Chapter of the National Association of Social Workers. She served as president of Friends of the Atascadero Library for eight years, helping to raise more than one million dollars to build a new Atascadero Library, which opened in 2014. She has also served as co-president of the American Association of University Women – Atascadero Branch, member of the Atascadero State Hospital Advisory Board, Loaves and Fishes gleaner, Senior Nutrition Program meal deliverer, and Atascadero Centennial Committee member. Ernst has received various awards, including the National Association of Social Workers Social Worker of the Year award and Administrator of the Year award.

Community and Public Service Award, Professional: Jill Bolster-White
Jill Bolster-White has 25 years of experience in non-profit organizations, serving as executive director of Transitions Mental Health Association (TMHA) since 1992. She oversaw the merger between SLO Transitions and the Mental Health Association that resulted in TMHA, the community-based mental health services agency in SLO. In her position, Bolster-White is responsible for the management and development of a budget in excess of nine million dollars, supervision and training of approximately 250 employees, administration of business and contracts, marketing and more. Under Bolster-White’s leadership, TMHA launched SLOtheStigma, a mental health awareness, education and stigma reduction campaign specific to the residents of SLO County. Bolster-White has served in a wide variety of community activities and organizations within the health and human services field, including current member and past chair of the Sierra Vista Hospital Governing Board, agency relations chair of United Way of SLO, chapter representative for the American Horticulture Therapy Association, and member of the National Alliance for the Mentally Ill.

Progress for Women Award: Lisa Ray
Lisa Ray is the founder and chief executive officer of the Children’s Resource Network (CRN) of the Central Coast, which provides free clothing, school supplies and resources to children and teens in need. Ray started the charitable non-profit organization in 2009 after purchasing clothing and school supplies for a single mom who could not afford them for her two children. Ray began by operating out of her home and recruiting volunteers to help collect and disperse donations. Since then, the CRN has helped more than 12,000 children on the Central Coast. Today, CRN operates out of a sorting facility which also serves as an emergency clothing facility. As her nominator states, “what started as a simple gesture to help one family quickly turned into full-fledged grassroots efforts which now serves two counties.” Ray has been received Congressional, Senate, Assembly and SLO County recognitions.

Grace N. Mitchell Lifetime Achievement Award: Elizabeth “Biz” Steinberg
Elizabeth “Biz” Steinberg is the CEO of the Community Action Partnership of SLO County, Inc. (CAPSLO), a community action agency serving low-income community members since 1965. As CEO, Steinberg is responsible for implementing the mission of the organization, which is to eliminate the causes of poverty by empowering low-income individuals and families to achieve self-sufficiency through a wide variety of community-based collaborations and programs. With more than 1,000 employees, and an annual budget of approximately $60M, CAPSLO serves more than 40,000 low-income individuals annually in 11 counties. Steinberg joined CAPSLO in 1978 and became CEO in 1984. Steinberg taught early childhood education at Cuesta College for 27 years before retiring in 2013. Steinberg is known for her advocacy of low-income children and families, and participates on numerous local, state and national boards, including Community Health Centers, Sierra Vista, SLO Housing Authority, Children’s Service Network, National Migrant & Seasonal Head Start Board and the National Community Action Partnership Board. She has received numerous awards, including Woman of the Year from the Commission on the Status of Women, Leadership in Excellence from the California Association of Non-Profits and Outstanding Leadership on Behalf of Children & Families from the SLO County Children’s Services Network.