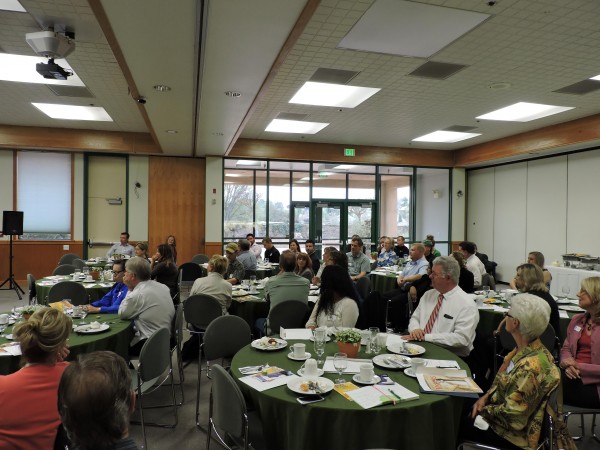 Attendees at the Wake up Paso Business Breakfast

The Wake up Paso Chamber of Commerce Business Breakfast returned on Tuesday, and saw a large turnout of many local business people and community leaders such as Mayor Steve Martin, Councilman Steve Gregory, Superintendent Chris Williams and others. There were three featured speakers as part of the program. John Purvis, the director of operations of Lockheed Martin in San Luis Obispo and a former CEO of AME Unmanned Air Systems, Paso Robles Chamber of Commerce Economic Development Director Pam Avila, and Brett Butterfield, the owner of the Ravine Waterpark. There were also two “Paso Pitch” presenters, including Leslie Kubin with her business Healing the Quantum Way, and Beth Brennan of Access Publishing. The breakfast was hosted at the Culinary Academy. 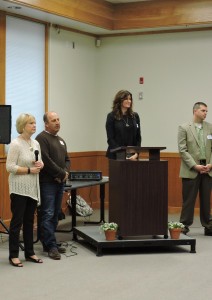 Purvis was the former CEO of AME Unmanned Air Systems, a drone company that was started in San Luis Obispo by Cal Poly grads that was recently bought out by Lockheed Martin. As Purvis explained, there are many different uses for drones, such as “going in” when conditions are dangerous or toxic. They even have agricultural applications, such as monitoring water resources. “There has been an explosion of individual use drones,” he said, saying that he expected new laws drafted within the next few years to address things like air rules and privacy issues.

Avila talked about the three different tiers of income, and how the middle class is defined, and then compared Paso’s numbers with nationwide averages. She explained that there were many different ways to classify middle class, one being strictly on income. She stated that the national income bracket for middle class was $25,000 all the way up to $100,000. “But in this county, $25,000 doesn’t go very far,” she said. She said that middle class could also be considered “enough money to live comfortably, pay your bills, and send your kids to college.” Ten-percent of Paso Robles residents are within the top income bracket, versus 16 percent nationally.

In the middle-income bracket, Paso lines up almost exactly with the nation wide average at about 40 percent. In the lowest income bracket, Paso Robles has 43.1 percent as compared to the national 33.6 percent, largely because of the amount of service jobs held by people in the tourism industry. While the middle class nationally is shrinking, “Paso Robles is doing positive things to look forward,” Avila said, saying that the mayor, council and the chamber are all making strides towards diversifying economic development and improving the local economy.

The third speaker was Brett Butterfield of the Ravine Water Park. He shared his expertise in creating a, “Disney-like” experience. “We found that the bigger rides at places like Six Flags actually drew the wrong kinds of crowds,” he said. He explained that making his water park affordable, family friendly and ADA compliant were keys to his success, as well as treating his employees kindly and fairly.

The “Paso Pitches” were Leslie Kubin from Healing the Quantum Way, a biofeedback therapy that can help people with stress and chronic diseases. Beth Brennan from Access Publishing spoke about how important it is to be found on the first page of Google. “The saying goes, if you want to hide a body, the best place is on the second page of Google,” she said. Access Publishing specializes in helping local businesses get found online, as well as providing graphic design and web design services, and also publishes the SLO Visitors Guide, produces the Paso Robles Daily News, and many other local publications.