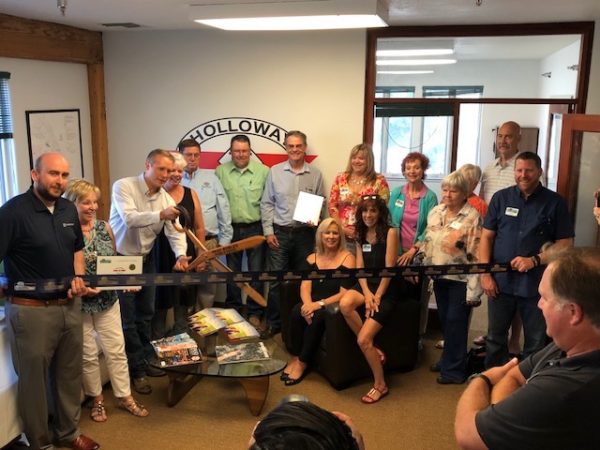 –The Paso Robles Chamber of Commerce held a ribbon cutting for Holloway Gypsum, which recently opened an office in Paso Robles.

Gypsum is a soft white or gray mineral consisting of hydrated calcium sulfate. It is widely mined and is used as a fertilizer, and as the main constituent in many forms of plaster, blackboard chalk and wallboard. Farmers use gypsum to neutralize soil alkalinity and boost water preservation.

President Vard Terry told several dozen chamber members about the history of Holloway Gypsum. Back in the early 1930’s, H.M. Holloway was a night watchman in Lost Hills oil fields. He noticed white outcroppings in the landscape and became curious. He sent some to a lab in Fresno, which identified the white stuff as gypsum or calcium sulfate. He then studied the uses of gypsum. He trucked tons of it to growers in Wasco and Shafter and they found it had a profoundly positive effect on their wheat fields, particularly in improving alkaline soil. That discovery of gypsum grew into a million dollar business which continues today.

H.M. Holloway, Inc. sells gypsum and other soil supplements to a variety of growers in San Luis Obispo County and throughout California.

Vard Terry has been with Holloway for over 40 years. His father and brother also worked for Holloway. His son started working for the company two years ago.