Paso Robles News|Thursday, August 5, 2021
You are here: Home » Best of Paso Robles » Where to play racquetball in North County

Where to play racquetball in North County 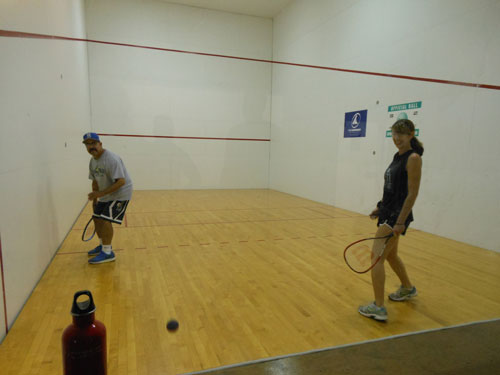 A couple of players compete at Champions Racquetball club in North County at a recent tournament.

Best places to play racquetball in Paso Robles or Atascadero

If you are looking go play racquetball in Paso Robles, CA or Atascadero, Ca, there are a few places to choose from. Most of them have regular groups of players who will welcome visitors or new-comers. It’s always a great way to work up a sweat and burn some calories.

Click here for rules on how to play racquetball

In the Open/A division Robert Ballo, Luke Newlon, Scott Brennan, and Tony Gamblin all gave Herb Yamashiro, an open player from Fresno their best effort but Yamashiro plays strategically and with such consistency that he was crowned king again, following his victory in the winter tournament. Veteran player Tony Gamblin took second place honors.

The Open/A Doubles paired McCarthy with Yamashiro and they won first place. Second place went to Bob Moss and Roger Briggs with some close games against Tracy Shearer and Tony Gamblin, and Scott Brennan and Luke Newlon.

Match play started at 8 a.m. with the Beginners/Novice division playing each other in a round-robin format. Eddie Fernandez was ready to play while Minardo was trying to convert Chad Williams, a professional motor cross racer, into a racquetball junkie – the lefty played really well. Both the Medrano and the Marshall families were well represented with Nick Jr. and Nick Sr. playing all morning well into the early afternoon – Nick Jr. is Atascadero High School’s future football star and plays racquetball for cross training, improving his hand-eye coordination, speed, and cardio.

The club’s newest inductee to the sport is Garrett Shiffer. “He picked up racquetball easily and played everybody we put on the court with him, after his first game he said he wanted to play on a regular basis.” Minardo says. “Twelve-year-old Evan Marshall, a soccer player and all-around athlete, and Noah Hernandez, another young athlete played well and I’m sure they are going to battle each other on the courts again real soon,” Minardo says. Hernandez and his father play handball every night at the club until Minardo converted him to racquetball too.

Tracey Richey won the Beginners/Novice division, but his son McKay Richey, a former Atascadero High School star offensive lineman, and Bill Murrieta gave him a run for his money. Several women played in the tournament, including Jessica Grimes, Judith Briones and Laurel Marshall.

“Champions would like to thank all the players and their families and friends for coming out and competing with great sportsmanship,” says Minardo. “A special thanks goes to all of our sponsors: SESLOC, Western Janitor Supply, Coastal Community Builders, Subway, Central Coast Spirit Store and Pizza Express. We couldn’t have done it without you!”