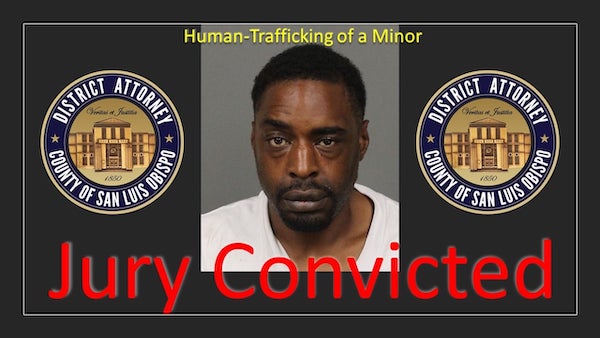 After pulling him over during a traffic stop on October 5, 2018, it became clear to San Luis Obispo Police Department Officer Quenten Rouse that Banks was involved in the trafficking of a 14-year-old girl for commercial sexual exploitation and that he did so by using force, fear, fraud, deceit, coercion, violence, duress, menace, or threat of unlawful injury.

Following volumes of evidence and testimony during the 12-day jury trial, the San Luis Obispo County Jury returned a guilty verdict after several hours of deliberation.

The trafficking survivor said she was very pleased with the jury verdict: “I am happy for myself and I feel successful.”  The victim is now doing very well in school and plans to be a beautician in the future.

“Ms. Doe’s bravery and resilience demonstrated strength and grace as she testified during this trial,” said Deputy District Attorney Christopher B. White.  “I am deeply grateful that so many wonderful people worked so hard to bring justice for our juvenile trafficking survivor.”

Judge Barry T. LaBarbera presided over the jury trial. Banks remains in custody at the San Luis Obispo County Jail with bail set at $1 million. He is due back in court on April 9 for sentencing. The charge and enhancement carry a maximum sentence of 15-years-to-life in state prison.

“We are grateful for the jury that came in to serve during this pandemic,” said District Attorney Dan Dow.  “This just verdict was a result of a lot of hard work and collaboration of our San Luis Obispo County Anti-Human Trafficking Task Force that we started in late 2014.”

In addition to local law enforcement witnesses, an expert witness from the Alameda County District Attorney’s Office, Inspector Tim Bergquist, testified on the subject of human trafficking, explaining the dynamics and sub-culture of human trafficking to the jury.  Alameda County District Attorney Nancy E. O’Malley has been a California state-wide leader on combating trafficking and created HEAT Watch several years ago.

–District Attorney Dan Dow announced today that a San Luis Obispo County jury convicted Lucion Lee Edward Banks, 37, for human trafficking of a minor, and it was found true that he used force and/or fear against the victim.

Further details in regards to his sentencing are pending a release of additional information from the DA’s office. Check back for updates.

Banks is charged with a violation of Penal Code section 136.2(c)(2) which is trafficking of a minor for commercial sexual exploitation while using force, fear, fraud, deceit, coercion, violence, duress, menace, or threat of unlawful injury. He is also charged with a second count of pimping a minor under the age of sixteen years of age. Banks does not reside in San Luis Obispo County and has ties to Sacramento, Oakland, and San Francisco.

“We are very grateful for the outstanding work of the San Luis Obispo Police Department Patrol Officer, who, while on an otherwise routine traffic stop, carefully evaluated important clues that pointed towards human trafficking,” said District Attorney Dow. “This is proof that the work of our Anti-Human-Trafficking Task Force and the continuous training of law enforcement has been incredibly valuable in raising awareness for this very important issue. Our community is strongly united in taking an aggressive stand against anyone caught engaging in the exploitation of another human being.”

The case is an ongoing investigation of the San Luis Obispo Police Department and the District Attorney’s Office Bureau of Investigation.