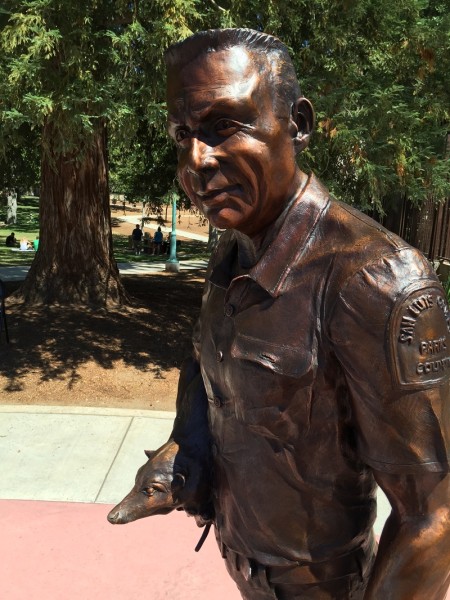 Charles Paddock is remembered in bronze, unveiled to the public July 4. Photo by Paula McCambridge

– Charles Paddock will now and forever stand at the entrance to the zoo he founded 60 years ago in 1955; in 1963, the zoo was relocated to its current location at the Atascadero Lakeside Park.

It took several years, but a devoted committee of volunteers, led by Atascadero City Councilman Bob Kelley and Chuck Ward, raised $60,000 to create the life-sized bronze statue that was unveiled to the public on July 4. Sculptor Mark Greenaway was commissioned to create the sculpture that shows Paddock in his park ranger uniform and carrying the zoo’s first animal, a scrappy possum named Cosmo Topper. Genesis Bronze did the foundry work.

Paddock was remembered by many for what they described as his commitment to children and animals in the Atascadero and the county. 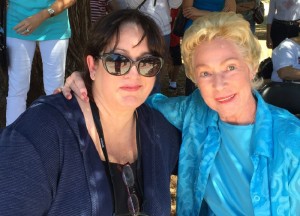 Bosnich remembered a story about two chimpanzees that escaped from their habitats when a contractor rebuilding part of their enclosure put the nuts on the inside and bolts on the outside — a no-no for chimpanzees who are adept at unscrewing nuts. The chimpanzees, Bosnich said, climbed a tall tree in the park, but her uncle remained even-tempered and eventually brought the mammals back to their repaired home.

“He went home and asked his wife to make two peanut butter sandwiches then climbed those trees himself and lured the chimpanzees down,” Bosnich said. “He had a calm about him; he could deal with crises well. That’s how I remember my Uncle Charlie.”

Bosnich and her daughter, Julie Heberer, traveled from San Pedro to be at the unveiling Saturday.

A tradition began on Saturday when Ward invited children to rub Cosmo Topper’s nose for good luck. The first child forward was young Max Mullahey, whose parents, Mike and Diane of San Luis Obispo were called upon to donate a sizable $5,000 so the project could be completed. 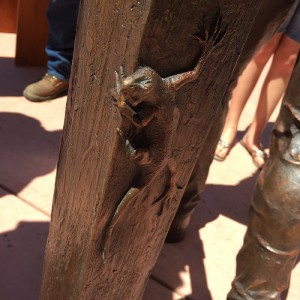 The Charles Paddock bronze statue included many details, such as this lizard perched on a post. Photo by Paula McCambridge

Mike Mullahey said he and his family were glad to help.

“We were here at the zoo a couple of weeks before I was contacted,” Mike said. “It was an easy check to write; it was an honor. This zoo is such a wonderful asset to the community.”

The Charles Paddock Zoo is located on five acres of land adjacent to the Atascadero Lakeside Park at 9100 Morro Road in Atascadero. For more information, go to charlespaddockzoo.org or call (805) 461-5080.