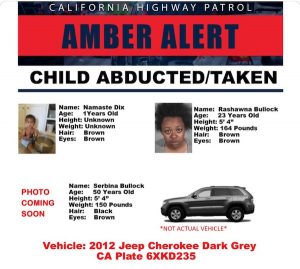 -CHP issued an Amber alert Wednesday for a child that was reported missing from Paso Robles. The child was identified as 1-year-old Namaste Dix. Authorities said Dix was last seen with his mother, Rashawna Bullock, Wednesday morning in Paso Robles.

Reports say that the mother allegedly kidnapped the child at knifepoint from a Paso Robles playground.

As of 2:11 Wednesday, the alert was de-activated. California Highway Patrol says the child has been located and the suspects are in custody.