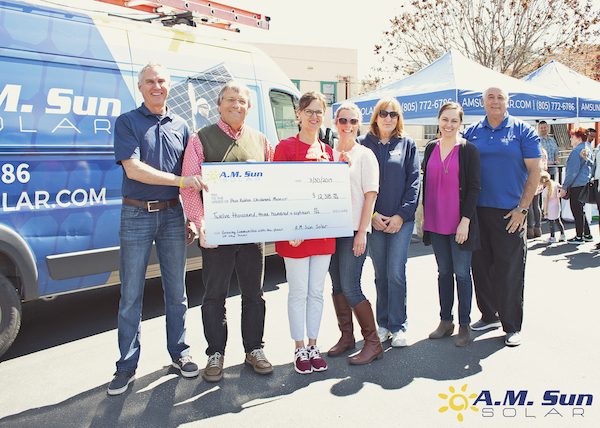 Over 1,000 children and families came out to the free play day at the Paso Robles Children’s Museum on Saturday, March 30. The museum co-hosted the event with Paso Robles solar installation company A.M. Sun Solar. Solar-themed crafts and educational exhibits were on display as well as free gelato from Leo Leo Gelato in Paso Robles. The Paso Robles Fire Department made an appearance with a fire engine that the children could sit in and learn about fire safety.

“We really appreciate everything A.M. Sun Solar has done for us and this donation is the frosting on the cake” said Jennifer Smith, Executive Director at the Paso Robles Children’s Museum. “We know how important renewable energy is and we look forward to using our new solar system to help educate the next generation.”

The newly installed solar energy system will offset 100-percent of the museum’s electricity usage and free up funds to install new educational exhibits. The equipment was provided at-cost and a portion of every solar energy system sold in March was set aside for the donation at the event.

“It was incredible to see the community turn out for the event on Saturday.” Said Glen Covert, a partner at A.M. Sun Solar. “‘Growing communities with the power of the sun’ is our mission at A.M. Sun Solar. Supporting organizations like the Children’s Museum and the important work they do for the community couldn’t make us happier. We are excited to continue to install solar all over the Central Coast and help grow our communities.”

The Children’s Museum has welcomed over 220,000 visitors since it was restored from the historic firehouse and opened in 2007. The museum continues to innovate their space while engaging with children in a joyful learn-through-play environment and inspire educational curiosity while honoring the heritage of volunteer firefighters.

A.M. Sun Solar is a locally owned and operated solar installation company located in Paso Robles. They install solar energy systems for Central Coast homes, businesses, farms, and wineries. In 2016, 2017 and 2018 they were listed in the top 3 fastest growing companies on the Central Coast by INC 5000, and have the highest rating in customer satisfaction. They employ over 60 Central Coast residents.