The vehicular manslaughter charge is a misdemeanor, Penal Code section 192(c)(2). Mondo is due to appear for arraignment on Feb. 11. 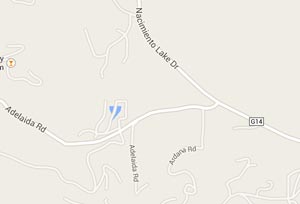 The vicinity of a vehicle vs. bicycle accident Friday afternoon. Image from Google Maps.

Lee Hekyung Craig, 62, of Los Angeles died after being hit on her Cervelo bicycle by a 2005 GMC Yukon driven by Joseph A. Mondo, 18, of Paso Robles, the report says. A second rider, Lawrence Paul Chong, 59, of Seal Beach, was also struck in the accident while riding a Trek bicycle. He was taken to the hospital with major injuries.

The accident occurred at about 3:10 p.m. Friday on Nacimiento Lake Drive just east of Adelaida Road. Mondo was traveling westbound. He was distracted when his cell phone slid off his lap and he attempted to retrieve it, the report says. But before he was able to get it, he was forced to take evasive action to avoid a stopped vehicle preparing to make a left turn into a private driveway. Mondo steered on to the right shoulder around the turning vehicle and again attempted to retrieve his cell phone. As he reached for it, the Yukon veered onto the shoulder and struck the two bicyclists, the report says.

Craig was pronounced deceased at the scene. Chong was taken to Sierra Vista Hospital. Alcohol and drugs are not suspected to be a contributing factor, the report says.