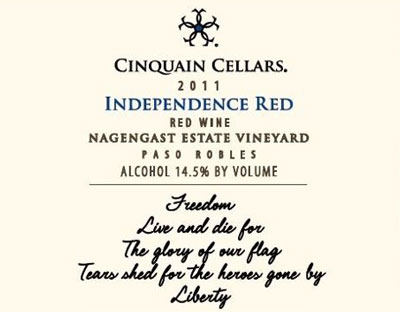 The back label of Cinquain Cellars Independence Red has a poem written by Matt Browne of Paso Robles.

Cinquain Cellars announced this month that its 2011 Independence Red was given the Best of Class award for Bordeaux Blends in the $20 to $29 price category at the San Francisco Chronicle Wine Competition, the largest competition of American wines.

Cinquain Cellars owner and winemaker, Dave Nagengast says, “The Paso Robles Bordeaux blends are some of the best in the world so we are thrilled to receive this award among so many fabulous wines. I hope that everyone thinks of Paso Robles when they’re looking for delicious and affordable blends.”

About the Independence Red

The Independence Red is Cinquain Cellars’ most-popular wine and has sold out every year since the winery opened in 2008. The 2011 vintage is a blend of Cabernet Sauvignon, Cabernet Franc, Merlot, Malbec and Petit Verdot. It is 100% estate-grown on the Nagengast Estate Vineyard in San Miguel. The list price of the 2011 Independence Red is $28.

Dave Nagengast, owner and winemaker for Cinquain Cellars also has a full-time job as the director of winemaking at Scheid Vineyards in Monterey County. Cinquain produces just 1500 cases of wine each year, and sell it direct to consumers, almost exclusively to wine club members.

Cinquain Cellars will be open to the public for tasting is during Zinfandel Festival Weekend, March 20-22, Friday through Sunday from 12pm to 4pm. They will also be pouring the Independence Red and others at the San Francisco Chronicle Grand Tasting at Fort Mason on February 14, 2015.