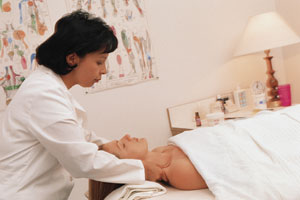 The Paso Robles City Council unanimously approved this week new rules governing massage services in town. The new change requires that massage therapists and owners of massage parlors be certified by the California Massage Therapy Council to operate or pass background checks set up by the city police department.

On Tuesday the council voted to accept the first reading and fee schedule. The rules are expected to be official approved at the council’s next meeting.

While most massage therapists and practitioners of the healing arts are professionals, in the last few years, the city of Paso Robles began receiving complaints about suspected illegal activity at massage establishments in town. The city council is considering new rules at its Tuesday meeting to regulate massage therapists. The Paso Robles Police Department has conducted inspections of massage studios, and while some establishments have closed, new ones have opened. Police have utilized undercover police officers in ‘sting operations’ to solicit illegal services from establishments. These operations had a nominal effect on illegal activity, the city reports. Successful undercover operations yield only misdemeanor arrests and do not result in establishment closure.

The state created the California Massage Therapy Council that established a certification program for professional massage therapists who meet rigorous training and educational standards, and pass background checks. The legislation also allows a city to require persons who do not have a CAMTC certificate but who want to operate a massage establishment to meet certain specified standards, including background checks and fingerprinting, as preconditions to obtaining a business license.

The city’s ordinance now requires that any person who provides massage in the city must have a CAMTC certificate. This requirement helps ensure that massage customers are treated by professionals who comply with uniform statewide licensing, training and experience standards, according to a city staff report.

The Police Department hosted a public workshop to discuss a proposed ordinance establishing the regulations described above. It received positive results from the public workshop, website feedback, and City Council ad hoc committee’s assessment of the ordinance.

The city sent 285 copies of the draft ordinance were mailed to any potentially affected business for continued input and revision. On May 13, 2013 staff met with Paso Robles Main Street Association and received written support for the proposed ordinance. City staff also worked closely with and received continued positive input from the CAMTC in drafting and revising the ordinance.