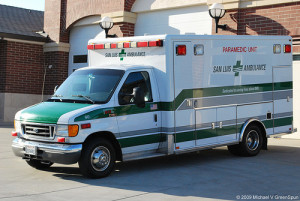 The Paso Robles City Council this month renewed a lease with the city’s ambulance service.

The council approved a five-year agreement with an option for an additional five years with San Luis Ambulance Services. The previous agreement signed in July 2003 had expired.

San Luis Ambulance Services will pay $875 in monthly rent plus $670/mo. for utility and janitorial costs.  About $18,500 in revenue will be added annually to the city’s general fund.

San Luis Ambulance Service, Inc. is the sole transportation provider for the critically sick and injured in San Luis Obispo County, including Paso Robles. By leasing space to the ambulance company the city receives ambulance service located directly in the city and revenue for both space and maintenance, which is used to offset the cost of operating the Public Safety Center. The center serves as the headquarters of the Paso Robles fire and police departments at 900 Park Street in downtown Paso Robles.