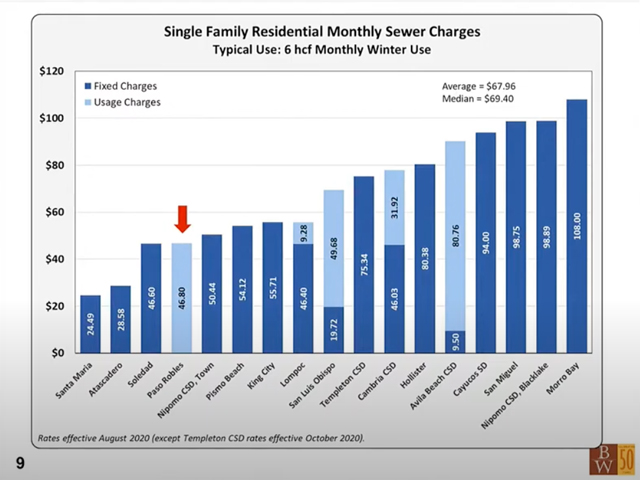 Wastewater Manager Matt Thompson showed graphs that indicate Paso Robles sewer rates are actually among the lowest in the county.

–The Paso Robles City Council met Tuesday night in a virtual online meeting. Interested citizens were able to watch the meeting on YouTube or listen on the radio station KPRL, but were unable to attend the meeting. The council and staff called into the meeting and were not physically present either.

The council voted to move forward to raise sewer rates in the city to address operational costs. Rates for low users would increase 24-percent in the first year, and 8-percent for the following five years. Wastewater Manager Matt Thompson recommends rates be reviewed every five years. Mayor Steve Martin said people are contacting him with allegations that Paso Robles sewer rates are the highest in the county. Thompson showed graphs that indicate Paso Robles sewer rates are actually among the lowest in the county. He said if the city does not increase sewer rates it may lead to more costly issues and greater increases in the future.

The council voted 5-0 to approve the recommendation and declare that a public hearing on the proposed rate increase will be held on April 20, 2021.

The council also approved plans for a 79-unit senior low-income housing unit to be built on the southwest corner of Woodland Plaza, better known as the Wal-Mart Shopping Center. Seniors may apply for the opportunity to live in one of the low-income units.

The project, proposed by the Paso Robles Housing Authority, is a single building planned to be designed with varying heights ranging from 1-story to 3-stories tall.